Super Bowl MVP was victorious on and off the field 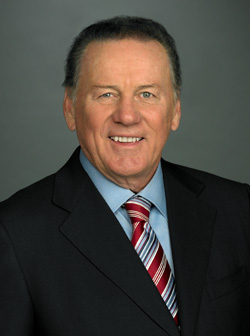 Len Dawson was an NFL quarterback for 19 years. And in 1970, No. 16 led the Kansas City Chiefs to a victory over the Minnesota Vikings in Super Bowl IV and was named the Most Valuable Player of the game.

Len retired from the NFL in 1976 as one of the best forward passers of all time and in 1987 was inducted into the Professional Football Hall of Fame. After his playing days, Len began an impressive career in sports broadcasting and currently serves as the sports director at KMBC-TV in Kansas City and the color analyst for the Chiefs Radio Network. He also hosted HBO’s “Inside the NFL” from 1977 to 2001 and worked as an analyst for NBC’s AFC coverage from 1977 to 1982.

Then in 1991 at the age of 56, Len was diagnosed with early-stage prostate cancer. He put to use the tools he learned as a quarterback to analyze the situation and beat his newest opponent. He has now been cancer-free for more than two decades.

Len is no stranger to adversity. “As a quarterback things didn’t always go my way, so I learned to make adjustments,” he explained. “When my doctor said, ‘You have cancer,’ I knew I just needed to make some adjustments and deal with it.”

Len owes the early discovery of his prostate cancer to his wife, Linda. He was in New York taping “Inside the NFL” for HBO when she read an article in the newspaper about Sen. Bob Dole’s prostate cancer. She also saw an advertisement in that same paper for free prostate cancer screenings at a local hospital that Friday. Linda knew her husband was busy, so she called and made an appointment for him at 9 a.m. When Len returned home to Kansas City on Thursday night, she told him about it.

“Like a typical man, my first reaction was to say I wasn’t going,” he said. “I didn’t think I needed to because I didn’t have any symptoms of prostate cancer. She held her ground, though, and said if I didn’t want to go I had to call and cancel myself. I decided that this was a battle I wasn’t going to win, so I kept the appointment.”

The doctor performed a prostate specific antigen (PSA) blood test and a digital rectal examination (DRE). He found an abnormality, so he told Len to schedule an ultrasound and a biopsy. Sure enough, the results of those follow-up tests revealed early-stage prostate cancer. Fortunately it was caught early, so it was still confined to the prostate gland and hadn’t yet spread throughout his body.

Len received a second opinion from a doctor in New York, who confirmed the original diagnosis. After carefully considering all of his treatment options, he ultimately decided to have a radical prostatectomy to get the cancer out of his body. The surgeon used a nerve-saving technique, which left him with no lasting side effects. Len stayed in the hospital for two days after his surgery, and it took him about six months before he was back to normal. He has been cancer-free ever since.

“As a quarterback and a broadcaster, I was on the fast track for a long time,” he explained. “I’ve slowed down with age, and I really enjoy putting my feet up and relaxing. But I know my health is important so I’m still very active with what I can do. The difference is that now my workouts consist of rounds of golf instead of training camps.”

Len considers that initial screening appointment to be the luckiest thing that has ever happened to him. “As the seventh son of a seventh son, I am supposed to have good luck,” he explained. “I am very lucky that my wife made that appointment for me because I never would have done it myself.”

Len now recommends that all men over the age of 50 get screened whether or not they have any symptoms. “Even the toughest guys need to take care of their health,” he said. “If there’s a problem, you want to find out about it as quickly as possible so you can deal with it. In sports and in life, you’ll face adversity. It’s up to you to make adjustments and make things right.”