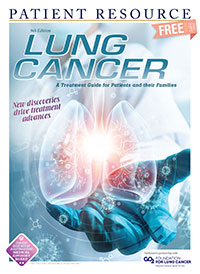 Treating lung cancer today does not look like it did even a decade ago. For years, the only treatments for lung cancer were chemotherapy, surgery and radiation therapy. Now, the U.S. Food and Drug Administration has approved many new lung cancer therapies that have led to longer survival times and an improved quality of life. These advances give people affected by lung cancer reason to be much more optimistic.

New drug therapies available include targeted therapy, molecular therapy and immunotherapy. Other newer non-drug therapies approved include cryotherapy, radiofrequency ablation and photodynamic therapy. Many new surgical techniques include video-assisted thoracoscopic surgery (VATS) and robotic surgery. New radiation techniques include stereotactic body radiotherapy (SBRT) and proton therapy. Experimental therapies, such as FLASH-RT, may also be available. Your case will likely be considered by experts to determine whether any of these therapies are best for you.

The introduction of molecular and targeted therapies, which allows doctors to personalize a patient’s treatment plan, has made a significant impact on lung cancer treatment. These drugs are designed to target specific gene mutations, alterations and fusions that are identified through specialized testing.

The lungs are a pair of large, spongy, expandable organs in your chest cavity that are surrounded by a thin layer of protective tissue (pleura). The right lung is a little larger with three parts (lobes), and the left lung has only two.

Over time, abnormal cells in the lining of the airways can accumulate to form a tissue mass (primary tumor). A primary tumor may grow into the lining around the lung and form secondary tumors nearby. Many lung cancer patients also have chronic pulmonary disease in the non-cancer tissues of the lung, which may interfere with lung function and alter therapeutic options. Pulmonologists often assist in assessing lung function.

In advanced disease, lung cancer cells break away to form tumors in the opposite lung and distant sites such as the liver, brain or bones. These are known as metastases. Even though they are in other parts of the body, they are still considered lung cancer and are treated as such.

A biopsy sample of the tumor or fluid from the lung or elsewhere is taken for examination by a pathologist. The pathologic type is crucial to know because each has distinct characteristics and responses to treatment. The sample may also be tested to find potential biomarkers that may influence treatment decisions. It is recommended that you have molecular testing performed with other diagnostic tests.

Non-small cell lung cancer (NSCLC) accounts for the majority of lung cancer diagnoses and has several subtypes, including the following: Small cell lung cancer (SCLC) is named for its appearance under a microscope. It often starts in the central airways (bronchi) in the center of the chest. An aggressive form of lung cancer, it most often spreads to distant parts of the body before it is found. Scientists have recently discovered that SCLC has several subgroups that respond differently to chemotherapy and targeted drugs. There are other less common types of lung cancer, which can also begin in other organs, including mesothelioma, typical and atypical carcinoid tumors, sarcoma and others.
Next