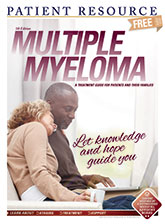 Multiple myeloma is a type of blood (hematologic) cancer that you may not have heard of before your diagnosis. To better understand it and make informed treatment decisions, it is important to learn as much as you can. As you do your research, you will find that doctors are learning more about the genetics behind the disease, finding new ways to treat it and developing better ways to address side effects. Even though it is typically managed as a chronic condition, there is hope for a cure.

Sometimes referred to as a plasma cell neoplasm, multiple myeloma begins when the blood’s plasma cells multiply uncontrollably. Plasma cells are produced in the bone marrow. They make different types of antibodies to help fight germs and viruses, and stop infection and disease. Antibodies are proteins created as a reaction to foreign substances, such as bacteria, in the body. As a type of white blood cell, plasma cells are an important part of the immune system, a network of cells that work together to defend your body against infections.

The myeloma cells can accumulate in blood and urine and eventually can damage the kidneys or other organs. They can also overcrowd the bone marrow, which suppresses the growth of healthy cells that produce blood. This unusual cell growth can result in anemia, bone damage and excessive bleeding from cuts. This accumulation of myeloma cells usually occurs in multiple areas of bone in the body, giving the disease its name, “multiple myeloma.”

When myeloma cells collect in bone marrow, they slow down the growth of healthy white blood cells, red blood cells and platelets. These cells collect in solid bone, causing holes called lytic lesions. The majority of people with multiple myeloma have these lesions when their disease is diagnosed.

People with multiple myeloma may or may not have symptoms, which can make it difficult to recognize. As a result, the disease may be at an advanced stage when it is diagnosed.

If your doctor suspects you have multiple myeloma, you may have blood and urine tests as well as a bone marrow biopsy and imaging tests, which may include magnetic resonance imaging (MRI) and positron emission tomography combined with computed tomography (PET/CT) and X-rays. Molecular testing may be performed to check for chromosome abnormalities.

Additionally, your doctor may order a biopsy of fat from around your stomach to check for amyloidosis, which is a buildup of amyloid, an abnormal protein. Amyloidosis may be either primary (with no known cause), secondary (caused by multiple myeloma) or hereditary (passed down from parents to children). Differentiating between amyloidosis and multiple myeloma may be part of the diagnostic process.

The only two known precursors to multiple myeloma are monoclonal gammopathy of undetermined significance (MGUS) and smoldering myeloma. MGUS occurs when abnormal plasma cells produce too many copies of an identical antibody. Most cases of multiple myeloma are preceded by MGUS, but it is unknown whether MGUS is always present before diagnosis.

Although the exact cause of multiple myeloma is unknown, scientists continue to learn more about the development of the disease. Treatments continue to improve as newer therapies are introduced, new drug combinations are being developed and new types of immunotherapy, such as bispecific T-cell engagers (BiTEs), are being approved. All of these advances have led to many patients living healthy, active lives while having multiple myeloma. Research is ongoing and more treatments are expected in the future.

The most common signs of multiple myeloma, which are attributed to the same factors used to stage multiple myeloma (see Staging), can be described with the CRAB acronym:

Bone lesions – multiple myeloma cells can cause bone damage (lytic lesions), thinning of the bones (osteoporosis) or a compression fracture of the spine