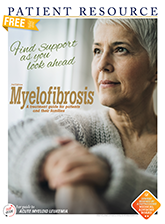 Learning you have myelofibrosis is often unsettling and unexpected. To better understand this rare blood cancer and make informed treatment decisions, it is important to learn as much as you can. As you do your research, you will find that doctors are learning more about the genetics behind the disease, finding new ways to treat it and developing better ways to address side effects that typically go along with it.

The Basics of Myelofibrosis

Myelofibrosis is one of six myeloproliferative neoplasms (MPNs). These cancers affect the bone marrow in different ways:

Myelofibrosis starts in the bone marrow, which is the soft, spongy center of some bones. It is where blood is created and is made up of blood stem cells, more mature blood-forming cells, fat cells and supporting tissues. Blood stem cells can become one of the following: 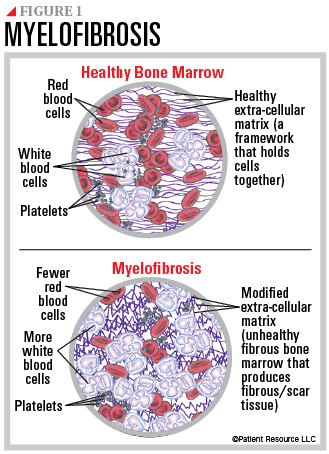 When not enough normal blood cells can be made, blood cell production may shift to other organs, such as the spleen or liver, which causes them to enlarge. For example, when the spleen tries to compensate for the lack of blood cells, it enlarges and often presses against other organs.

Myelofibrosis symptoms, progression and treatment can vary widely. Most common symptoms are fatigue, feeling full quickly, weight loss, fever, bone pain, night sweats, itching (especially after bathing), and abdominal discomfort or bloating. In the absence of symptoms, blood tests may indicate abnormal amounts of cells that can prompt the need for further testing.