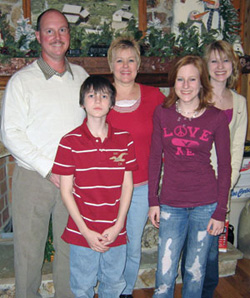 Robert (Bobby) Harsh defied the odds of surviving Stage IV melanoma, thanks primarily to the “miracle” immunotherapy, approved by the FDA in 2011. His unflappable attitude, honed by more than two decades with the Maryland State Police Aviation Command, has served him well since his initial diagnosis in 2007. Bobby, along with his wife, Donna, and their three children, live in Williamsport, Md. Bobby plans to retire and work for his family’s ambulance business. Read Bobby and Donna’s blog at bobbyharsh.blogspot.com.

For the past 22 years, I’ve been a state trooper and helicopter flight paramedic, so it’s not surprising that I’m a person who lives by numbers. When I was diagnosed with metastasized melanoma in 2009 and looked at the numbers associated with that scenario, I could see it was not good.

I have been misdiagnosed, undergone a major surgery, failed a clinical trial and washed out of a cutting-edge immunotherapy treatment. Statistically, I shouldn’t be here today.

Fortunately for me, my doctors recommended a clinical trial that enrolled 50 patients across the country in its final investigational phase. It saved my life.

I first began this journey in the fall of 2007 when I was (incorrectly) diagnosed and biopsied by my doctor (and confirmed by a lab) with basal cell carcinoma. A plastic surgeon removed the mole, which was sent to a second lab.

Within a few days the plastic surgeon called me and told me surprisingly that I had melanoma. When I got the news, I was shocked. I didn’t know much about melanoma except that it was skin cancer.

We couldn’t proceed until we solved the discrepancy between the two lab reports. Finally, after a third opinion from an expert in New York, the melanoma diagnosis (Stage IIC) was confirmed. I now needed a surgical subspecialist, who along with my plastic surgeon would perform a difficult surgery to biopsy the sentinel lymph nodes beneath my cheek, and then reconstruct my face. The procedure took more than eight hours, leaving me with a scar running from my left temple to three inches down my neck.

The good news was that I was cancer-free. However, an oncologist told us there was a high likelihood that the melanoma would return. He then referred me to expert oncologists at a national cancer institute where I chose to enroll in a clinical trial to test a cancer vaccine. While the vaccine did not affect me, the regular scans were crucial. In January 2009, the radiologists discovered that the melanoma had metastasized to my lungs.

We had to wait three months for the next scan, which confirmed I had Stage IV melanoma—diffuse and inoperable. At this point, we knew there was a low probability of survival. Although discouraged, I was anxious to try a second clinical trial. But first I was required to have a specific FDA-approved immunotherapy treatment. It’s a tough inpatient drug regimen. Unfortunately, it was a washout for me as well.

Looking back, however, my timing was really good. When I returned to my oncologists, they had found another trial, which would begin recruiting patients soon. I was accepted but first had to be drug-free for eight weeks.

At that point, in the summer of 2009, with no guarantees for the future, we loaded up our camper with our three teenage kids and headed to see the western national parks for two months. It was a long-planned trip I had always wanted to take, and it was great.

When we returned, I began the trial. Every three weeks, we traveled five hours to a treatment center for an IV infusion. A scan was taken every 12 weeks to check my response.

My largest tumor measured 1.2 centimeters at the beginning of the trial. We anxiously waited for the scan results at three months. Almost unbelievably, the radiologist couldn’t find the largest tumor! A number of additional tumors were also gone. Needless to say, we celebrated! Over the next year, they all dissipated.

I have now been on the same drug for more than two years. I remain cancer-free and am forever grateful for this miracle drug. Not everyone’s body will respond, but I’m thankful mine did. I may take it for the rest of my life because, unfortunately, my cancer could come back at any time.

When people ask how I have coped, my wife, family and friends, of course, are a huge part, and police organizations are very tight. But I also tell them that I try to live by not worrying about the things I cannot change. I don’t always succeed, but day by day, and sometimes ignoring the numbers, I have made it this far.