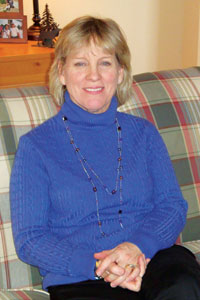 Janice Updike is a walking miracle. She has survived metastatic melanoma for many, many years. After several surgeries, including two on her brain, she lost feeling in her right hand, so she had to teach herself how to write again with her other hand. In the early years, she found herself fighting feelings of depression and intense fatigue.

Janice is the executive assistant to the executive director of Adult Discipleship at the Church of the Resurrection in Leawood, Kan. Recently, Janice took up golf — and loves it. She also volunteers for the Bloch Cancer Hotline. She and her husband, Alan, have a married son in the Army who is preparing for his second deployment to Iraq, and a daughter who is a sophomore in college.

One month before my wedding in 1979, I had a mole removed from my left shoulder because of my wedding dress. I think it had been there all of my life. When the dermatologist looked at it, he thought it was fine, but decided to send it to the lab. It came back as melanoma. We were all devastated.

Shortly afterwards, I had three lymph nodes removed and they also tested positive for melanoma. I was now 21 years old and newly diagnosed with cancer and about to be married. Like most everyone else, I asked, Why Me? I didn’t know if I was going to make it through a year or even six months. It was pretty scary, but I have to thank my husband because he never wavered.

For the first six months, I just went monthly to have a follow-up scan. Then, I considered participating in a national clinical trial, but it would have involved regular air travel to a distant city and, even then I might have been in the “surgery only” group. I made the difficult decision not to enroll.

That period was a bit of a haze. I was still asking why did this happen, and I was depressed and discouraged. I knew, however, that I had to become a more positive person. I had to put my faith in my doctors, and I made it through with their help, and the encouragement, support and prayers of my husband and family.

I was in remission for the next three years, but in 1982 that’s when my life fell apart. I began having severe headaches, and my right hand kept falling asleep. I was working in a dental office and couldn’t hold onto the tools. My primary care physician sent me for another CAT scan and the doctors discovered the bad news — they found that the melanoma had spread to my brain.

Looking back, I know that my neurosurgeon is the reason I’m alive today. Not only did he disagree with his colleague on whether to do the brain surgeries that I would eventually need, but also his encouragement and positive attitude kept me going. After the first tumor was removed from my brain, I had no feeling on the right half of my body. He then found a second brain tumor and six weeks later, when they performed a routine chest x-ray, they discovered a tumor in my lung. By now, I was wondering how much more my body could take.

Recovering from the surgeries, I was very fatigued, but I knew I had to get started with physical therapy. The numbness on my right side slowly went away -— except for my right hand. I could grip things, but I had no feeling in that hand, and still have no feeling in it today. I taught myself to print with my left hand, but at times it was very frustrating.

In addition to everything else, I now had half of my head shaved. Thirty years ago, wigs were not very pretty, and sometimes I wore bandanas. I continued to work at the dentist’s office and tried to have a sense of humor about it all, but I was very sad when I realized that I was losing my childhood dream of becoming a dental hygienist. I soon left the dental office and went to work in a very upbeat and busy job so I wouldn’t have time to think and be discouraged.

Towards the end of the treatment, after much discussion and prayer, we finally decided that we would risk having children. I badly wanted to start a family and had been waiting for years. Fortunately, we did have two healthy children.

I am so thankful — especially for my physicians. Every time my surgeon sees me he still says that he can’t believe I’m here. I did not have an easy road. I fought to come back from the surgeries and the depressing times, but I’m a big believer in prayer, and I’m living proof of the results of hard work, a great support team and a positive attitude.