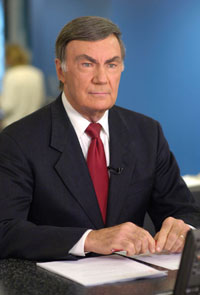 Sam Donaldson is a familiar name to most Americans, and is easily recognized around the world. For the past number of years, he has brought his unique broadcasting style to television.

In 1995, however, Sam became known for an entirely different and unwelcome reason, when he was diagnosed at the age of 61 with stage III cancer. He was inducted into what he calls the Melanoma Club. “You’re drafted and you suddenly find yourself in a club that you didn’t want to join.”

Sam’s melanoma story is similar to many in that he first observed a mole changing colors in 1988 and had it removed. The mole and its surrounding tissue were sent to several pathology laboratories for review. All of the reports came back negative for melanoma. Sam said he had no reason not to believe this, and carried on.

Seven years later, while soaping in the shower, he discovered an egg-sized lump in his groin, and he knew that something was wrong. “These things don’t just appear overnight, but I had never noticed it. That night I felt it and immediately thought — there’s a problem here. I wasn’t sure what it was except the average person who knows something about cancer would immediately worry. The next morning, a friend of mine recommended his doctor who looked me over and I told him about the mole they had taken off that wasn’t melanoma. He said he didn’t know about that, and wanted to have it immediately biopsied.”

A biopsy was performed and this time, the results came back positive for melanoma. Through a series of appointments, it was agreed that he needed to have surgery to remove the lump, but prior to the surgery, he was referred for a consultation with a renowned oncology surgeon at the National Cancer Institute (NCI).

He knew of this surgeon and scheduled an appointment. “The doctor was very congenial. He examined me physically, looked at the CAT scan result and the data on my biopsy and said, ‘I think you have a good chance to lead a long, and normal life.’ I blurted out — ‘I don’t believe you!’ I had gone home after the (initial) biopsy and told my wife, Janice, ‘I think we have about three months.’ I’m not a doctor; I don’t know how I arrived at that, except we know that melanoma is a bad actor. It doesn’t always follow a normal course of any sort.”

Thankfully, his surgeon was right. He was also fortunate that at the time, he met the requirements for a new NCI research protocol, and he was eligible to have the surgery performed at the NCI. “I thought that was suspicious and I said to my surgeon, ‘If we break any rules, or cut any corners to get me in your protocol — never mind the melanoma — my colleagues in the press corps will kill us both!’”

The surgery was successful; only one lymph node was involved with no metastasis. Sam was told he had a 45 percent chance that it would not recur, and no additional treatment was prescribed at the time. He researched other options, but in the end, chose to heed his physician’s advice — which has turned out to be a good choice.

“When I was diagnosed, I sat with my wife and we talked about it. I was not scared in the sense of losing my life. I was sad because I was, and am, having a terrific time. I’ve had a great life. Of course, we’ve all had some setbacks. We’ve all had some private griefs, but not the kind that many people in this world have experienced.”

He continued, “We are fortunate — those of us who survive — knowing that so many people are not. I have not had any recurrence and I go every year and get a scan, and I do not have any foreboding about going. This gave me a far better appreciation of people who are ill and who have a disease like cancer and the hardships they go through.”

Sam has maintained his optimism and sense of humor despite his cancer diagnosis, but he is deadly serious when it comes to eliminating cancer. “I believe that during the lifetime of younger people who are alive today, we will see cancer eradicated like polio or smallpox. I’m not saying that we will be managing this disease like some of the advanced cocktails do with AIDS. No! I believe we will cure cancer.”

Basing his opinion on scientific advances in cancer treatment that have been successful in the past several years, his professional relationship with oncologists at the NCI and his own personal research, Sam is a firm believer in the need to provide strong funding for cancer research.

“When I first came to Washington it was always said, ‘You can’t cure this problem by throwing money at it.’ Oh yes you can — when it comes to curing dread diseases. We need to fund peer-reviewed research. So it works on the rat, but how do you know if it works on us? You don’t unless you have the money to do the trials. It’s a crime not to spend some of our national treasure on this.”

He illustrated his passion for curing cancer with a story about fellow cancer survivor, General Norman Schwarzkopf, who has been an active spokesman for prostate testing awareness. “I’ll mention Norman Schwarzkopf. He likes to say that he commanded about 545,000 troops in the Gulf in 1991. He said, ‘If at the end of the war, I picked up the phone and I called the President and said, ‘Mr. President, I have some very bad news. I have lost every one of my troops.’ They wouldn’t have waited to court martial me. I would have been strung up before the sunset.’”

“We lose a few more than that every year in this country to cancer. We should get on with this business of curing these diseases.”

As a survivor, he wants to do what he can to bolster the hope of other survivors. “I want to encourage people who have been diagnosed with cancer. That’s something every cancer survivor can do — be a living witness to others similarly situated.”

He recounted the story of a phone call from Senator Connie Mack III just after the news of his diagnosis was published in the Washington Post. “He called my office and said, ‘Sam, I just read that you have melanoma. Let me tell you something. Six years ago, I had a number of melanoma lesions on my body and they were all taken off, and here I am — no problem. You’re going to be just fine.’”

“I can’t tell you what that call did for me. I say this to people, if you hear of someone you know who has a similar condition diagnosed — call them up! Tell them, here I am! In my case, it’s almost 14 years. It lifts their spirits; it makes them feel better.”