Survivor Speaks Out About Melanoma Danger 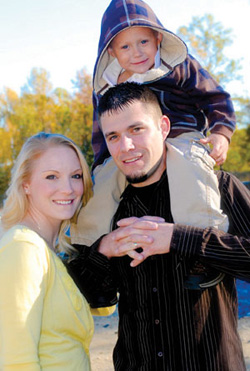 Brittany Lietz Cicala’s life seems almost perfect. Crowned Miss Maryland in 2006 and a contestant in the 2007 Miss America pageant, she was also a Washington Redskins cheerleader in 2007. The following year, she married Joe, her high school sweetheart, and the birth of their son followed in 2009. She is currently in nursing school fulfilling her dream to become an obstetrics and gynecology nurse and will graduate in December 2012.

However, her outwardly ideal life carries with it a lifelong concern. Brittany was diagnosed with Stage IIa melanoma in 2005 when she was 19. Thankfully, her disease was caught early, but the surgery to remove the cancerous mole and several surrounding lymph nodes left a seven-inch scar. Since then, while she has remained in remission, she has had more than 40 moles removed. Brittany began speaking out against the dangers of outdoor sun exposure and artificial tanning beds as part of her Miss America pageant platform. She continues to be a passionate advocate for raising melanoma awareness.

I am a true believer that everything – bad or good – happens for a reason. While I would not have chosen to have melanoma, being diagnosed has blessed my life in incredible ways. It has helped me realize that like most people I was stronger than I realized and I could fight. It made me a completely different person.

My survivor story began in 2005. Two years before, I began using a tanning bed as a teenager because my skin was so pale. I figured the best way for me to look better was to go tanning. I couldn’t have been more wrong. I was eventually going five days a week for months.

After nearly a year of tanning, my mom noticed a mole on my back about the size of a nickel, very dark and raised. She began insisting that I go to the dermatologist, particularly when I scratched the mole and it bled. I finally gave in and made the appointment.

My dermatologist diagnosed me right away and removed the mole. The tissue was sent to a lab to be reviewed, and two days later, she called me at home to inform me it was melanoma. Telling my family and Joe that I had cancer was one of the hardest things I have ever had to do. Needless to say, we were all in shock.

I had surgery and my melanoma was diagnosed as Stage IIa. I was very lucky that the tumor had not metastasized considering how much tissue they had to remove on my back. They did a sentinel node biopsy and removed additional lymph nodes from under my right arm. That was the most nerve-racking test for me because I didn’t know until two days later that the cancer was truly gone.

That was seven years ago. I’m fortunate because I have remained in remission since then and have not needed additional medical oncology treatment. Because of the damage from the tanning, my skin still doesn’t produce normal nevi (the medical term for moles), but thankfully, I’ve only had the one melanoma. I have had more than 40 moles removed that were borderline Stage I, abnormal or atypical—more than 15 in the past year and a half alone.

Melanoma, however, is something that you have to watch carefully because it can return at any time. I only have to see my oncologist once a year now, but I continue to see my regular dermatologist every three months. If my dermatologist or I notice anything that looks different, we don’t wait. She takes it off. I would rather have the scar than have to live through all that turmoil again.

When I was active in the Miss America organization as Miss Maryland, I had the opportunity to speak to large groups of teenagers. My platform was Raising Skin Cancer Awareness for Children and Young Adults. I was determined to not be ashamed of my scars as they reminded me that I was still alive, and it was an honor to share my story. Over the years, I have had dozens of emails, letters and texts from young women in particular who have told me they quit tanning or even made a dermatology appointment after hearing what happened to me.

I am a wife and a mom and will soon be a registered nurse. My role has changed somewhat, but my job isn’t done. I encourage the younger women who have had melanoma to speak out, especially to teenage girls. Even today, they don’t think that skin cancer is real cancer. I have been involved in anti-tanning legislation and have testified before Congress. My passion is still to educate and warn teenagers, children and parents, and if I can prevent even one person from going through what I have gone through, it’s all been worth it.