It's OK to be Devastated As Long As You Get Motivated 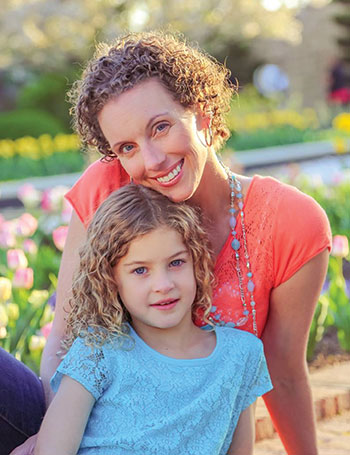 As a busy young mother caring for a toddler and a baby, Heather Snyder regretfully neglected a suspicious-looking spot on her left calf. By the time her dermatologist got a look, he knew immediately that they were dealing with melanoma, and tests soon confirmed the unthinkable. At barely 30 years old, Heather was diagnosed with Stage IV melanoma and given less than a year to live.

Cancer doesn’t care if you’re young, busy or if you have family that’s depending on you. No one is safe, and it took a while to accept my reality: Not only did I have cancer; I had the worst kind possible—the kind that kills.

The disease had already spread to my lymph nodes, and I was told I only had six months to live. Hearing that my life had an official expiration date was devastating, especially with a two-year-old son and a six-month-old daughter at the time.

I cried hysterically but quickly realized that I needed to pull myself together and face this disease head on. It was time to suck it up and find a way to survive—for myself and my family.

A surgeon immediately removed the affected areas, and I began treatment, but six months later the cancer returned.

I began aggressive biochemotherapy, which consisted of a combination of drugs. Cancer and chemo became our new “normal,” but only because we didn’t have any other choice.

Because I still had two tumors left on my butt (God has a funny sense of humor), doctors operated again, but five months later the cancer was back. I cried all weekend until my doctor said he knew of a new drug I could try, but it was still in a clinical trial.

After traveling to the facility where the clinical trial was offered, I was tested for the BRAF mutation and was thrilled that I qualified. The trial drug has kept the cancer at bay for five years. Most patients only take it an average of eight months, but my body responded extremely well so for now I continue to take this medication twice daily. Although there have been random (and concerning) side effects, I’ve managed to keep them under control with the help of several doctors (whom I’m lucky enough to have on speed dial).

Throughout treatment I always did my best to stay active, and I feel like I’m the healthiest I’ve ever been right now. I exercised regularly and still ran during chemo, which I believe alleviated some of my side effects and kept my mind right as I dealt with this disease. Joint pain was a problem, but the more I kept moving, the better I felt—thus my desire to work out almost every day.

I’ve run in several half marathons over the past few years, I completed a marathon, and I have a triathlon coming up. I didn’t let cancer cramp my style.

You’re going to need plenty of support to help you through this, and I was lucky enough to have it from every direction. My husband, parents, siblings and in-laws pulled together and helped me tremendously, as did our church community who sent over food and set up a fundraiser for us. I’m eternally grateful to everyone who reached out, and I couldn’t have survived without them.

Today, I try and return the favor so that other patients with advanced cancer realize you don’t have to live life feeling like death is breathing down your neck. It does get better, and you can have a busy, active and healthy life both during and after cancer treatment.

I struggled at times but have used this opportunity to teach my kids that you have to be tough to make it in this world and that their mommy is tougher than cancer!

Several years after being diagnosed, I’m eternally grateful that I’ve been able to watch my children grow up while enjoying a healthy, active and cancer-free life! To say I’ve been humbled is an understatement; I’m eternally thankful for every single waking moment.