Melanoma Survivor is too Stubborn to Surrender 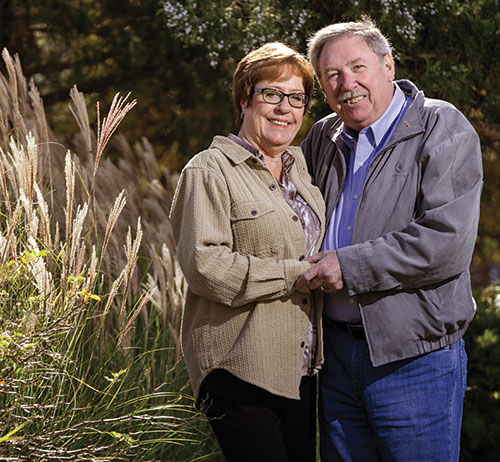 When Dennis Walker was diagnosed with Stage IV melanoma in February 1994, doctors told him he wouldn’t live to see Christmas. Not one to go down without a fight, he immediately began aggressive chemotherapy expecting that treatment would either kill him or cure him.

Since his diagnosis, Dennis has celebrated many Christmases with his wife, children and grandchildren, forever grateful for proving the doctors wrong. During treatment he lost his appetite, 70 pounds and all his hair, but he ultimately won the war against cancer, and wants others to know that cancer is not a death sentence.

I was 50 years old when a dark, dime-sized mole appeared on my right shoulder. A dermatologist removed it immediately, and then a pathologist confirmed it was cancerous. My diagnosis was an emotional rollercoaster because of multiple doctors with different opinions. After a surgeon removed the lymph nodes from under my arm to see if the melanoma had spread, the tests came back cancer-free and I thought I was in the clear. Unfortunately, 10 months later at a routine checkup, my blood tests confirmed the cancer was not gone and had spread.

I had six tumors in my liver. Doctors suggested that instead of putting my body through hell (and my family in debt), I should just stay comfortable and enjoy the time I had left—basically, to aim for quality over quantity of life. For me, that wasn’t an option. I’m way too stubborn and had way too much to live for.

As you’d expect, this was a very scary and overwhelming time for my family, but from that point on, my wife, Rita, and I made fighting cancer our full-time job. Friends took over running the apartment complex we had just bought; family members made sure our two kids and dog were taken care of; and we temporarily moved to Houston to begin treatment.

Knowledge is power, so the more we knew about what was in store, the better we felt about the road ahead (and keep in mind this was before the Internet). Rita took notes at all of my appointments and kept a diary of my symptoms, and I accepted books and advice from the R.A. Bloch Foundation. I especially loved learning about visualization techniques and pictured Pac-Man eating my cancer cells while I went through chemo.

I took interferon alfa and interleukin-2 weekly, and slept a lot with the help of morphine. I could tell the cancer medication was working because the side effects I went through were absolutely horrible.

Everyone warned me I’d get sick during chemo, but I really wasn’t prepared for just how bad it would get. I always had a fever or was cold, my mouth was always dry, and I couldn’t keep food or water down for the longest time. My wife would cook meals nightly, but my taste buds had changed and I was always nauseated. I pretty much lived on Ensure and ice cream as I went from 200 pounds to 130. I was pretty much just teeth and eyeballs.

Someone asked when I was going to shave my head, but that really wasn’t part of my plan—although in hindsight it should have been. I woke up one morning and my bed was covered in hair, and the rest came out in the shower. It was a mess, but I was extremely aware I wasn’t the only one fighting this demon. I remember sharing an elevator at the cancer center with a little girl who was 7 or 8 years old and completely bald, thinking, “I can do this—and so can she.”

Thankfully, I was right. My immune system rose to the occasion and eliminated the cancer. My hair grew in darker and straighter, I finally got my appetite back, and life slowly started to fall into place. Although being cancer-free is the greatest news a patient can hear, we were afraid to celebrate and still hold our breath every year while waiting on my blood tests.

Cancer changes everyone that it touches, so these days I find it almost impossible to get mad. I also find it hard not to warn others to use more sunscreen and stay out of the sun, especially if you have light eyes and fair skin like me. I feel like the biggest cause of death in men is procrastination, and I was very lucky I acted quickly.

Don’t let yourself believe that cancer and death go hand in hand. The R.A. Bloch Cancer Foundation has built 24 Cancer Survivor Parks throughout North America designed to give patients courage and hope while walking through an uplifting maze of survivor stories and quotes. Visit one if you can, and hopefully Bloch’s words will help you as much as they helped me: “Cancer is a word, not a sentence.”