Survivor Perseveres and Defies the Odds 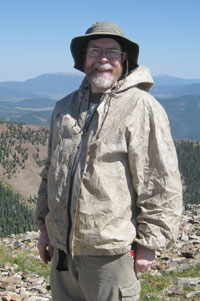 David Mueller has a positive outlook on life and super energy despite having fought melanoma (1978, 1987) and rectal cancer (1996). He has a family history of melanoma and several generations have had the disease. His rectal cancer diagnosis followed later but was unrelated.

David and his wife, Anne, who is a teacher, have two grown children and one granddaughter. They live in Merriam, Kansas. A pharmacist since 1980, David has worked i  most recent years as a Pharmaceutical Production Pharmacist at the University of Kansas Hospital.

He sings in his church choir, teaches Sunday School, volunteers with the Bloch Cancer Hot Line and is active as a leader in Boy Scouts. He and his son (an Eagle Scout) completed two 90-plus mile treks over mountains at Philmont Scout Ranch in New Mexico. Both were accomplished after all three cancer diagnoses.

When I was first diagnosed with cancer, I had great difficulty even saying the word melanoma — my mouth just kind of curled in when I tried to say it. I was a fourth-year pharmacy student at Drake University in Des Moines, Iowa, in the fall of 1978. I was engaged to be married and to some degree did not allow myself to get too emotionally disturbed by it.

When I called the dermatologist’s office to inquire about my recent lab results, I was given the diagnosis over the phone and told I needed to have surgery. Shortly thereafter, I had a wide excision with skin graft between the shoulder blades. Over the next spring and summer, my doctor removed a number of moles. This was just the beginning of surgeries and skin grafts.

My dermatologist quickly helped our family join a research group at the National Institute of Health’s National Cancer Institute (NIH/NCI). My family has hereditary melanoma. My father’s mother died from melanoma before I was born and later my mother’s father also died from the disease. My mother and father, sisters and niece, and my daughter have had melanomas, some with skin grafts. My son has had dysplastic moles, but no melanomas. Thankfully, all treatment within the family has been surgical with no metastases.

From 1980 to 1987, I had no recurrence. We lived in Iowa and in Saudi Arabia and continued to see dermatologists. I had many moles removed and in early 1987 I noticed a hard spot in my axilla (armpit).

Returning to the states, we moved to Kansas City, but also went to the NCI to be checked again. The NCI staff recommended that with my history, it needed to come out soon, so a surgeon in Kansas City removed all the lymph nodes from the left axilla area — 31 total. The initial lymph node was the size of a robin’s egg and it was malignant. This time I was referred to an oncologist. After the surgery, we decided against more treatment. I have had no melanomas since and work hard at sun avoidance.

However, the day before Thanksgiving in 1996, I was standing at our kitchen sink when blood began running down my leg. I was being treated for hemorrhoids, but this was obviously something different and scary. I was examined and the doctor gave me a presumptive diagnosis of rectal cancer. He sent me immediately to a gastroenterologist who said at my age of 38 rectal cancer was unlikely but scheduled a colonoscopy the next day. When the pathology came back, the diagnosis was confirmed at stage IIIc.

Of the treatment options available I chose to have surgery first to get it OUT of my body. Due to the location of the tumor, I had to have my anus, rectum, sigmoid colon, and part of my descending colon removed and a permanent colostomy put in place. I was in the hospital over Christmas and it was the worst Christmas of my life.

After a short recovery period, I began chemotherapy and radiation. I selected an oncologist at the medical center where I work. After completing both treatments, I have remained cancer-free for 15 years.

According to the statistics, I probably should have died twice — but we are people not numbers. Additionally, a colostomy has been no big deal for me and the alternative wasn’t the best. My wife and my kids have been by my side through all of this, and my faith and belief system have been imperative in staying positive. I have now lived long enough to see my kids graduate from high school and go to college, my daughter get married, and for me to have a grandchild. As a recovering perfectionist, being diagnosed with cancer has helped me appreciate all that I have.