Survivor Used Adversity to Help Create Resource for Others 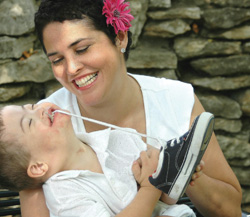 Dolores Kitchin is one of those unique individuals who persevered through a personal crisis and used it to create something that has helped thousands of people. On October 23, 2004, Dolores was diagnosed with stage I (HER2-negative, hormone-positive) breast cancer. She knew she couldn’t fight her cancer alone and still managed her work, her home, and coordinate the care of her then three-year-old, special-needs son with her husband, John.

Faced with this daunting new situation, she created MyPinkPlanner.com. This free website features an interactive calendar where patients can post daily life needs that they cannot accomplish alone. Friends and family members can sign up to offer assistance on the password-protected site. It also provides survivors with the opportunity to blog updates on their condition.

In addition to overseeing the website, Dolores is the Director of Public Relations at Children International. She has been a television reporter, producer and model. She and John live with their son in Kansas City, Mo.

When I was diagnosed, I knew I was going to need help in order to get well faster. Like many women, I don’t like asking for help, but I couldn’t do it on my own. I needed a system to organize the overwhelming details of people wanting to help my family and me — without all the exhausting phone calls.

I really wanted a way that we could all share a calendar, and it turned out that the Internet was the answer. A friend helped me create the website, and it made it so much easier for my family members, friends and some very kind people whom I hardly knew, to know what they could do for us. They began bringing us dinners and one person even scrubbed our bathroom floor. It was amazing to see their willingness to help.

I was very lucky to have found my cancer early. One day I noticed a lump when my hand brushed against it on the higher side of my right breast tissue, closer to my sternum. I wondered if I was imagining it — I was still young and cancer didn’t run in my family.

I called my doctor and after waiting and watching for a couple of weeks, it was still there. He sent me for a mammogram and an ultrasound, where the radiologist found the lump and advised me to get it checked out further. I then had a surgeon perform a biopsy, and he was fairly confident that it was cancer. I needed to see an oncologist.

This was really frightening. We had been through three difficult years with our son’s health, and I knew that I had to do everything I could to fight this. I didn’t want anyone to raise my son except for my husband and me!

I visited three oncologists, but I knew immediately which one would become my doctor. She was very direct, intellectual and what I call, conservatively aggressive. She told me that my cancer was fast growing and aggressive, but that it was common. She told me, “We are going to find a cure for you.” That’s what I needed to hear, but I also wanted the truth — so I could face it.

Then came the hardest news for me — she advised me to shut down my ovaries as part of treatment. We were trying to get pregnant at the time, and being from a large family, I wanted more children. I know it seems odd that I was weighing treating cancer with having a baby, but this was my internal tug of war.

I chose to follow her advice, but I cried in the treatment room when I called my brother, a plastic surgeon, to ask his guidance. The emotions came tumbling out, and I was angry. I didn’t smoke or drink. I was a runner. Why did this have to happen?

I returned to my oncologist’s office two weeks later and discovered that the tumor was dying. When her nurse told me, we were so excited that our faces hurt from smiling.

From there, I elected to have a bilateral mastectomy with immediate reconstruction. Thankfully, we don’t need our breasts to live, and I knew I didn’t want them if there was a chance the cancer would recur. I chose to have reconstruction because I felt that just coming out of surgery with the process started would put me on the way to healing. Through everything, John was so supportive – always right beside me.

After surgery, my oncologist recommended four treatments of chemotherapy and six weeks of radiation. The tumor was less than .5 centimeter from my chest wall, and she suggested radiation based on the close proximity to the muscle despite the bilateral mastectomies — just to “clean up” any stray cancer cells. I had begun taking a maintenance drug on my first visit to the oncologist and continued it for three years. Next, I began taking another drug, which continued for two more years. I celebrated my five-year cancer-free anniversary in October 2009 — with friends and a glass of champagne.

As I went through my cancer treatment journey, I saw that people have such big hearts and really want to help. Cancer is horrible, and I wish we didn’t have it. But, by letting people help you, you get to see God changing the lives of the people around us.