Survivor Fought Hard to be Around for Her Daughters 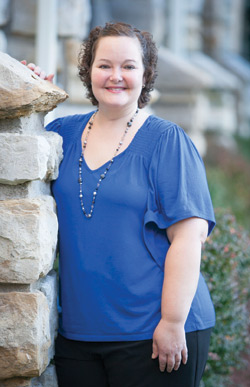 Misty Smith was just 35 years old when she was diagnosed with Stage II triple-negative breast cancer in November 2011. Despite an incorrect initial diagnosis and the development of an autoimmune lung disease, she beat her cancer and is now on the road to recovery. Misty works as a third-grade teacher and has two daughters of her own. She enjoys taking pictures, going on walks, getting pedicures and spending time with her family.

You know what your body should feel like, so if you think something is wrong, push your doctors to investigate further. If I hadn’t done that during my run with breast cancer, things may have turned out very differently.

Back in 2011, I’d had a head cold for a couple of weeks and was having some pain around my breast. I thought I’d just pulled a muscle, but one night I decided I wanted to have it checked out anyway. While I was taking a shower the following morning, I felt a lump and knew I needed to accelerate my appointment.

My family doctor got me in right away, and after a quick exam, referred me to a nearby hospital for a mammogram and an ultrasound. The test results revealed what the doctors deemed to be a fluid-filled cyst, and they immediately drained it with a needle aspiration. Three days later, the lump was back. A second ultrasound the following week confirmed that the cyst had returned and that it was already the same size as it had been before it was drained.

At that point, I asked for a referral to a surgeon. He did yet another ultrasound followed by another needle aspiration. And just like the time before, the lump returned only a few days later. I’d had enough, so I told my surgeon I wanted it out. He respected my wishes and removed the cyst on Nov. 18. Four days later on Nov. 22 – a date I’ll never forget – my surgeon called me to say that what we’d thought was a cyst was actually cancer. I had Stage II triple-negative breast cancer—specifically, invasive (infiltrating) ductal carcinoma.

As soon as I hung up the phone, the tears began to flow. I cried for hours, mostly because I was terrified that my daughters would have to go through life without their mom. Luckily, I’m blessed with some amazing family and friends, and within the hour I was surrounded by several of them. I don’t know how I would’ve made it through the night alone.

I soon underwent surgery, including a lumpectomy and lymph node dissection in which they removed 24 lymph nodes from under my left arm. A month later, I had another surgery to have a chemotherapy port installed, and I then began eight rounds of chemotherapy. The side effects were tough, and after the third and fourth rounds, I was actually hospitalized for about a week due to dehydration and extreme nausea, among other things. Emotionally, I had a difficult time, too, but I knew I had to fight with everything I had to be there for my girls.

Following chemotherapy, my doctors ordered a few follow-up scans, the results of which hit me like a ton of bricks. They showed spots in my lungs, liver and under my arms. It looked as if my cancer had spread and advanced to Stage IV.

To find out exactly what was going on, my oncologist ordered a mediastinoscopy to obtain a biopsy. To everyone’s surprise, the results showed not metastasized cancer but a granulomatous inflammation. As it turned out, I had developed an autoimmune lung disease called sarcoidosis, which is what was showing up on the scans. Sarcoidosis treatment involves high doses of steroids, which I took and will need to continue to take each time the disease flares up. After confirming that I didn’t have Stage IV cancer, I underwent radiation therapy 33 times to round out my initial treatment plan.

I wouldn’t have made it through all of this without my family and friends. They were with me at almost every treatment appointment and even put on a benefit in my honor. I also received a lot of support from the school district I work for and my community.

This journey has taught me that I’m truly blessed and that life is never guaranteed—none of us are promised tomorrow. I spend every second I can with my children, and it meant the world to me to see my little girl start kindergarten and my oldest start college. I’m much stronger physically, mentally and emotionally than I ever thought I was, and I’m just so thankful that I had doctors who listened to me when I knew something wasn’t right.