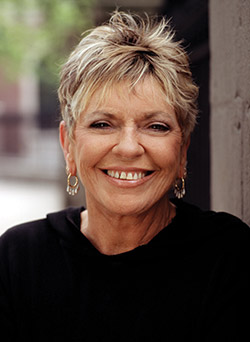 An outspoken, successful journalist, Linda Ellerbee has worked at NBC and ABC, owns her own production company and created the award-winning “Nick News with Linda Ellerbee,” a Nickelodeon news program for kids. As a veteran newswoman who has covered many topics over the years, she knew next to nothing about breast cancer—at least until her diagnosis in 1992 of Stage II disease.

At the time of her diagnosis at age 47, Linda had already found several benign lumps over the years that never turned into anything; in fact, she had stopped having annual mammograms. One day, however, she found a lump in her left breast that hurt when she pressed on it. Her doctor initially dismissed it, but the pain continued for six months. A mammogram and biopsy revealed a slow-growing tumor. Linda knew she needed to learn more about it.

“Journalists don’t actually know anything, they just know how to find out things,” she said.

So she got to it, researching, reading and talking to people. When it came time to find a surgeon, she wanted a specialist. But the first surgeon told her he hoped she wouldn’t annoy him with all of her questions, so Linda decided she needed someone new.

“I believe in being an informed patient,” she said. “Some women turn everything over to their doctor, and that’s their choice. But a good doctor is the difference between life and death, or disfigurement.”

Once she found a surgeon she trusted, they decided her options were a lumpectomy or a mastectomy. Because of a precancerous condition in her other breast, she opted to have a double mastectomy and made the very personal decision not to have reconstructive surgery.

“I traded my breasts for my life and have never regretted it,” she said.

After surgery came six months of chemotherapy, during which she lost her hair, eyebrows and even her toenails. After six months of treatment, it took another six months before she felt normal again. She compared her treatment to a valley she had to get through.

“You just keep walking until one day you look up and you’re out,” she said. “It was a long, hard process and nobody tells you that it doesn’t all go away right after chemo ends. It got depressing at times, but to risk it and go through it is to say, ‘I believe in tomorrow.’”

Linda discovered how crucial a support system was late in her journey. She’d made two early mistakes: not seeking other survivors sooner and not asking her family for more help. When she was diagnosed, she simply didn’t consider the thousands of breast cancer survivors out there. Once she became aware, however, she discovered how helpful support groups really were. She also discovered how her family felt during her treatment. Looking back, she realized she hadn’t let them in as much as she should have.

“They loved me very much and would’ve felt better too if I’d only asked for more help,” she said. “They felt useless. If you love them, feel what you feel, say what you feel and let them help. Asking for help isn’t just for you.”

Laughter was also beneficial during treatment. One day while throwing a ball for her dog, she bent down to pick it up and her breast prosthesis fell out of her t-shirt.

“My dog grabbed it up and took off down the street,” she said. “I started running after him, yelling for him to give me back my breast!”

As soon as she realized what she was doing and how silly it all must’ve looked, she stopped, sat down and started laughing—and it felt good.

“You’ll cry throughout your journey,” she said, “but nothing says you can’t laugh, too.”

Although a good attitude is helpful, she pointed out, it’s not a cure. “You can’t always be strong,” she said, “and you shouldn’t have to be. Feel whatever you’re feeling and know that it’s OK. Nobody dies from cancer from a bad attitude.”

Now as a breast cancer survivor, Linda continues to share her story as an inspirational speaker—and continues to make a big noise about cancer.