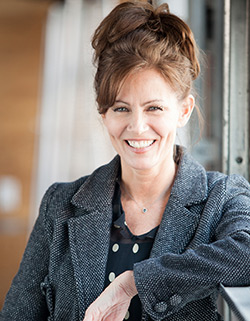 One “client” I never anticipated adding to that list was cancer. But at just 29 years old, I received the shocking news that I had Stage II invasive ductal carcinoma in my right breast. I felt like I was in the prime of my life, so I was overwhelmed with frustration. And because so much of my profession was based on my appearance, I wondered if I’d have to start a new career.

My health came first, though, so I pushed aside those thoughts. After getting a second opinion, I dove into my treatments, which included a lumpectomy, four rounds of chemotherapy and radiation therapy. I treated cancer like it was my job — doing every test and treatment prescribed.

The treatments sent my cancer into remission, but two years later it came back in the same breast. This time around I sought three opinions and ultimately chose the doctor who was most aggressive in his approach. I underwent six rounds of chemotherapy, followed by hyperthermia treatment, more chemotherapy and finally, radiation implants. Due to the nature of my work, the final breast reconstruction was very important. I opted for a TRAM flap. The surgery was long and hard, and they had to take skin from both my stomach and my back. Fortunately, I healed more quickly than I was told; most likely because I had continued to exercise up to that point.

The longer I went through the process, the more I realized it was important and freeing, to be open about it with as many people as possible. I also had some positive and funny experiences I didn’t want to keep to myself. For instance, after working a fashion show, two people approached me to compliment my hair. Little did they know I was actually bald at the time and wearing a wig! I also landed a modeling job for a health and fitness advertisement when I was right in the middle of chemotherapy treatment. There I was jumping around in a wig and a leotard when I was in the worst health of my life, but it made me happy to know I could still be productive.

My mom, dad and sisters were with me at every step, and my friends stepped up in a big way, too. From accompanying me to appointments and checking in on me daily to traveling long distances for visits and enlisting an entire church to pray for me, I couldn’t have done it without them. I’ve cochaired Art Bra, which raises money to help uninsured and underinsured cancer patients. It feels great to give back and help others.

As a cancer survivor, I feel a sense of strength. Stay strong, and remember to laugh along the way!