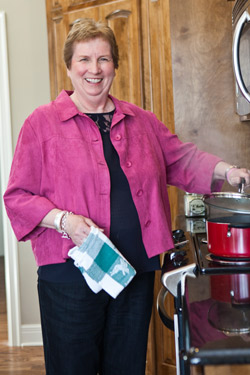 Linda Iliff has battled cancer twice without letting either diagnosis get her down. She credits her latest victory over Stage II breast cancer to the support of her family and friends as well as the tremendous communication among her physicians and health care team. Married with one son, she works as a receptionist at a recruiting firm and is known among her co-workers as a proficient cook, especially for her famous dips that no one around the office can seem to replicate.

I suppose when you’re diagnosed, your first thought is, you’re going to die. Your second thought is, no you’re not.

This all started for me with a routine mammogram in October 2011. They noticed something suspicious on my right breast and told me to come back in six months. But my son was getting married in November, and with all of the excitement, I basically blew it off and didn’t think about it much.

The next February, however, got my attention when I developed a rash on the same breast. I didn’t know what it was, and I had no idea I had breast cancer.

I made an appointment with my regular internist, and she knew right away. After multiple mammograms, sonograms and even an MRI, I got the call while I was in my car: Stage II invasive carcinoma.

Now, I’m not a crier, so I never broke down. I was more focused on what to do next, and I just wanted to get on with it.

I already had a wonderful oncologist from a bout of melanoma a couple years earlier, so I relied on her guidance again. She started me first on chemotherapy to get rid of the rash and to shrink the tumor in preparation for surgery. So in March, I began eight chemo treatments over 16 weeks, starting with four treatments of one drug and then four of another.

That was a tough time. I lost my hair, and while I never threw up, I was sick to my stomach a lot. The worst part was losing my appetite. I love Mexican food, but none of it tasted good — and that’s a miserable feeling. A friend of mine brought over plenty of Ensure just to be certain I was getting some nutrition.

After about five weeks of rest to let my body recover, the surgeon removed the breast and three lymph nodes. However, my oncologist had some concerns because some residual cancer cells were found in the nodes. A second surgery removed an additional lymph node that thankfully was all clear.

A month later, it was on to radiation — 30 treatments, every work day for six weeks. But compared to the chemo, those were easy. And I’m proud to say I worked the whole time and only missed four days during the whole process, which was a good thing because I’m not a person who likes to stay home.

Through it all, we were just overwhelmed by the number of people who brought food, came to visit and sent flowers. But people were also really respectful because everybody knows that chemo makes you so tired. Plus, I had told them, “Don’t call and bother me.” My husband, who only missed a single appointment, kept all of our friends and family up-to-date with a monthly email.

The biggest thing that helped me was finding people to talk to who had been through the same experience. I was able to communicate back and forth with an acquaintance of mine who had also battled breast cancer, and that was so valuable to me. Doctors and nurses are fine — and mine were wonderful, especially my surgeon’s nurse whom I could talk to about anything. But you also need someone you can call who’s been through it.

Moving forward, I’ll be visiting my oncologist every three months for the next two years for PET scans, but so far, I’m in the clear. I don’t know for sure when I’ll have the breast reconstruction done, but I definitely want to get started on that soon. And of course, I’ve been instructed to call my doctor if I notice anything funny going on with my body. They don’t take any chances!

I’m just so glad that I got past my initial reaction when I got that call in my car. That was the day I decided to fight and do whatever they told me to do to survive.