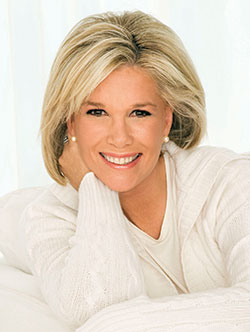 Millions of Americans woke up to Joan Lunden every day from 1980 to 1997 as she co-hosted ABC’s “Good Morning America.” She reported on a wide range of issues from locations around the world, and interviewed famous and powerful people.

During her time on television, she placed a priority on stories that highlighted her passion for healthy living and wellness—two things that were always important for her and her family.

After leaving television, Joan continued her career as a journalist, author and businesswoman, and served as spokesperson for the American Heart Association and American Lung Association. So when she was diagnosed with Stage II triple-negative breast cancer in the summer of 2014, she might have asked “Why me?” or wondered, as many of her fans and admirers have, “Is this fair?”

Once the initial shock of the diagnosis had passed, and she worked through her apprehension of telling her children – her twins, the youngest, were nine at the time – her early thoughts went in a different direction. She was concerned about how the diagnosis might affect not only her health, but her life’s work as well.

“My first reaction was that I’m out here trying so hard to make a difference in people’s lives,” she said. “It really worried me to have to tell people I had cancer, and that maybe they would think that somehow I was paying lip service and wasn’t really taking care of myself—that I didn’t have the right to be in front of them and inspire them. As it turned out, it was paying dues on a debt I had not yet incurred, so I could show other people.”

Joan had been faithfully undergoing annual mammograms for years, but at one point she discovered she had dense breast tissue, which cannot always be adequately screened by regular mammograms. During an interview, Susan Love, MD, author of “Dr. Susan Love’s Breast Book,” strongly encouraged Joan to ask for a follow-up ultrasound.

The recommendation may have saved Joan’s life. Her mammogram was clean, but the ultrasound detected something suspicious. A biopsy came back positive for cancer.

Joan’s diagnosis put her in a small minority of cancer patients. Accounting for only 10 to 20 percent of all breast cancer cases, triple-negative breast cancers test negative for the three most common types of receptors known to drive breast cancer growth: the hormones estrogen and progesterone, and the HER2 receptor. Joan’s cancer was aggressive and growing quickly, but was discovered early enough that she was given a positive prognosis. A second tumor, ductal carcinoma in situ (DCIS), a non-invasive cancer, was also diagnosed in the same breast.

Feeling like she was “shot out of a cannon” to a multitude of doctor appointments – and facing an avalanche of information – Joan consulted with oncologists for first and second opinions. She selected an aggressive new treatment trial that prescribed neoadjuvant chemotherapy, a lumpectomy, additional chemotherapy and radiation.

Some experts cautioned that the regimen was too much and too new, and that the trial was too small.

“I listened to this and thought, ‘Wait a minute, if I have an aggressive form of fast-growing cancer, I want to send in the Army and the Navy, Special Forces and the Air Force,’” she said. “By going with the more aggressive regimen, however, I was committing to a longer period of time and possibly more side effects.”

She began her treatment in June 2014. Reading extensively and becoming a self-proclaimed “warrior,” she was determined to do everything she could, including a dramatic realignment of her diet to follow her nutritionist’s “anti-cancer” advice plus working out daily, often with a personal trainer.

While Joan credits her limited side effects to her healthy routine, she still experienced extreme fatigue, required two blood transfusions, and lost her hair—after which she posed bald for the cover of the Oct. 6, 2014, issue of “People.”

Even through this difficult period, Joan still wanted to help others. For the duration of her nine-month treatment schedule, she shared her experiences in real-time video blogs on her website. Viewers tuned in—sometimes by the millions.

“My father was a cancer surgeon, and he dedicated his life to fighting cancer,” she said. “This was my opportunity to continue his legacy; now was my real chance to do my part. I realized I had a platform where I could reach people.”

Joan emerged from her treatment in March 2015 cancer-free. As she began to recover, she wrote about her experiences in a new book, “Had I Known” (published September 2015). But another new project also took shape: an innovative Internet TV channel, “Alive With Joan,” through a partnership with TAPP, a subscription television company. The channel focused on breast cancer and women’s wellness. It provides a wide range of information, including Joan’s reporting, nutritionists, personal trainer videos, town hall meetings and more.

“I don’t want anyone to go through this journey alone,” she said. “I understand that feeling now, even though I have an unbelievable circle of support around me. Then, the hardest time for all those survivors is when you’re done with treatment. I want to provide a lot of information to help them live their lives afterward, too.”

Looking back, Joan said her battle with cancer gave her a chance to re-evaluate and refocus: “You come to learn the importance of family and friends and the healthy power of support, and every time I say that to someone, it makes me more committed to what I’m doing. It’s definitely not just my breast cancer journey, it’s my new mission.”