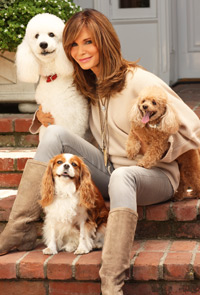 Jaclyn Smith burst onto the American scene in 1976 when she played the calm and cool Kelly Garrett in the original “Charlie’s Angels” television series. She went on to portray strong characters in more than 50 film and television appearances, including Jacqueline Bouvier Kennedy and Florence Nightingale. Also well known for her business savvy, she trailblazed her own self-branded clothing and home décor products with Kmart as well as her own lines of skin care products, fabrics and wigs, which are available at www.jaclynsmith.com.

However, when the award-winning icon faced a breast cancer diagnosis in 2002 at the age of 55, she had to battle back fear. “Once you hear the word ‘cancer,’ you are paralyzed,” she said. “Your world stops spinning, and the first thing you ask is, ‘Am I going to make it? Am I going to be here for my children and my family?’”

Fortunately for Jaclyn, she trusted her doctor and had a supportive close-knit family and girlfriends surrounding her. And perhaps most importantly, the cancer was detected early.

“Fear is the worst,” she said. “You have to face it because if you don’t, it just bites you in the back and stops you in your tracks. But as I talked with my doctor and my husband, Brad – who is a surgeon and researcher – and shared my concerns with my close friends, I educated myself and that helped calm my fears.” Calming those fears, she said, was also crucial for her children.

“It was important to me to not show my fear to my kids. Cancer is a family affair and affects everyone. If they saw me as normal as I could be, with my head held high, that spilled over.”

It was more than a decade ago when Jaclyn was in the middle of a busy spring at home in Los Angeles, preparing to take her teenage daughter to New York City to attend a dance camp. She was checking tasks off her to-do list, and one of those was her annual mammogram.

The scan showed something suspicious, but Jaclyn was in excellent health and wasn’t concerned. The follow-up tests included a needle biopsy, an ultrasound and a core biopsy, but she was still so sure that everything was fine she went back for the results by herself.

“My doctor is a good friend of ours,” she said. “When the results came back, he told me that he had mixed news. The bad news was that I had cancer. The good was we had caught it early at Stage I, and it was very small – the size of a point of a pencil. At that point, I guess I sort of panicked. I told him, ‘Just take my breast off.’ You don’t hear anything after you are told you have cancer. That’s why you should never go back for the results alone.”

Jaclyn was ready to act quickly, but her doctor and husband cautioned her to slow down and consider her options. She and Brad both did extensive research and chose the recommended treatment of a lumpectomy and radiation.

“I had the surgery and was fortunate because that summer when I had radiation, I was surrounded by my family and my girlfriends,” she said. “They were so supportive that I did not go to a single radiation appointment by myself. Not everyone has the luxury of those kinds of friends, but there’s a large number of support groups where you can make good friends.”

The summer of 2002 turned out to be extremely busy for Jaclyn, and in hindsight, she views it as a blessing. She had just launched a furniture line, made a cameo appearance in the new “Charlie’s Angels” movie and also had a recurring role on CBS’s “The District.” During this same time, she also went for her radiation treatments.

“My career had a resurgence, and for some reason, I had an abundance of energy—despite the radiation,” she said. “It was almost like God said, ‘You aren’t going to sit around and feel sorry for yourself. You are going to work!’ My daughter decided to forego her camp so she could be home with me. My son was at ease once I assured him that everything was going to be fine. Plus, everyone on the set of ‘The District’ could not have been more supportive.”

After completing radiation, Jaclyn was cancer-free and has remained that way since 2002. Maintaining a balance of work and family, she continues to make television appearances and expand her retail lines.

Because she had always made her health a priority, Jaclyn did not have to make substantial lifestyle changes. However, she did take adjuvant therapy for five years and also began her personal regimen of alternating mammograms and MRIs every six months, which she still continues.

In 2006, Jaclyn was ready to share what she had learned from her experience and crisscrossed the country for two years with the Strength in Knowing program. She told her story to encourage and help educate women about breast cancer and its risk factors.

She also feels strongly about annual mammograms. “Early detection is the key,” she said. “If I had waited another year, the cancer would have been more advanced. The most important thing is to have a doctor you trust who advises you, have a mammogram every year and do self-examinations as well.”

In retrospect, Jaclyn said that cancer changed her, and while challenging, the change was for the better. “Having cancer can make you a stronger, braver person. I was always pretty positive, but I am a private person as well. I found strength and healing in reaching out to others. But it also taught me that I could overcome my fears, to never give up and always have hope.”