Attention to Her Body’s Messages Resulted in Early Detection 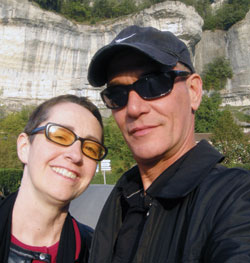 Lisa Greaves is a gifted communicator. She is a writer, public speaker and is the Director of Integrated Media at the American Society of Clinical Oncology (ASCO), where she has worked since 2000. She serves on the Patient Resource Cancer Guide Advisory Board and on the Board of Directors for the Breast Cancer Care Foundation.

She is also a cancer survivor. In 1994 at the age of 31, Lisa was diagnosed with breast cancer (ductal carcinoma in situ or DCIS) in her right breast and three months later, with an invasive, aggressive tumor in her left breast (with lymph node involvement). Later, she also discovered that she carries the BRCA-1 mutation.

Lisa is married to Tom, who is a visual artist. She is an avid reader and writer of poetry, who loves to cook and play pool.

I think our bodies give us all kinds of clues and cues, and we have an ability to listen to the messages that they are continually sending us. I was fortunate that I listened when I did, and I feel that the first little cyst I found, while it was the start of my cancer journey, was also a gift.

Like all cancer stories, mine has its own unique flair. I was 31 when I had two breast cancer diagnoses in the space of three months. The second was a raging tumor that — during this time of testing and intense scrutiny — went undetected by man or machine.

When I was first diagnosed, in the summer of 1994, I had found a tiny lump in my right breast, which was diagnosed as a cyst. It would not go away on its own so my doctor sent me to a breast cancer surgeon who aspirated it twice. The second time, it came back the same day. She then removed it surgically, and we were both surprised when it was cancer. Actually, it was more shock than surprise.

After my first diagnosis, I had follow-up tests and was making treatment decisions for this very early-stage cancer when I discovered a lump on my other breast that had not shown up in any of the examinations. It was surgically removed, and it revealed a very aggressive, malignant tumor.

The gift of that first weird cystic cancer was that it helped me to be more in tune with my body. My second lump was at the base of my breast, against my rib cage, and it could have easily escaped my notice. Throughout my treatment, which involved side effects and complications, I listened carefully to my body and it helped me to focus on the right things.

So in January 1995, I found myself with a high-grade tumor, lymphatic involvement, and numerous decisions that had to be made. After much consultation, I opted for bilateral mastectomies with immediate breast reconstruction, but I still had challenging decisions about chemotherapy and radiation options, complicated by specific biological aspects of my cancer.

My husband, Tom, who was my boyfriend at the time, and I adopted a practical mental outlook: first priority = not to die. In the end, I opted for the most aggressive treatment available to me, which culminated with in-patient high-dose chemotherapy — in the same hospital in which I was born! Fortunately, I had this phenomenal support team of doctors, nurses, fellow patients in my support groups, friends, family and Tom to help me through this intense and scary process.

When it comes to celebrating my survivorship, I choose to do it from the date of my hospital discharge, when I left the treatment side of my disease and entered the healing side. For all of the real power that cancer has, I felt then and I still feel now that it could never steal my joy.

Once I finished my treatment, I gradually became an advocate for other cancer patients, and I delved into learning more about the disease of cancer. I was asked to talk with newly diagnosed patients and worked to help them navigate the cancer care delivery system. Early in my survivorship, I was asked to speak at an American Cancer Society event, and gave a speech titled “The Story of My Wig,” which told how I bought a wig, but ended up not wearing it because that’s what felt more normal to me. I unexpectedly discovered that my baldness opened doors to honest communication about my situation.

I have experienced the happiness of survival, mixed with the reality of risk; I have celebrated the milestones of many friends in the survivorship community, and have been to far too many funerals. One of the gifts of the disease is that it has heightened my appreciation for what I have, for the joy I have in life and in helping others. I don’t expect that part of my cancer journey to ever end.

Untitled Poem Don’t laugh because my poems rhyme; I find the metering sublime; Anything that I control; Soothes the ache within my soul.               Lisa Greaves