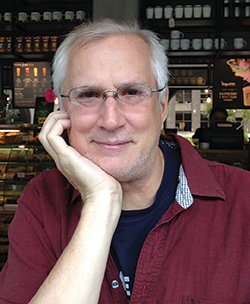 After Alan Messer received a prostate cancer diagnosis, he immediately knew he wanted to let his brothers and male cousins know. His father had previously been diagnosed and Alan was thankful that he knew the family history to share with his doctors. He credits a trusted medical team and the loving support of his wife with helping him navigate through treatments and continue onward. A happily married artist and activist, Alan is dedicated to spreading the word about prevention and early detection.

One day in passing, literally as he was passing from one room to the next, my dad mentioned that his doctor wanted to take out his prostate because of cancer. As is common with men of his generation, he didn’t talk a lot about his health. I don’t know if he was being stoic or if he just didn’t want to burden others with complaints, but I feel really lucky that he shared this important information with me. He had his prostate removed. He passed years later in 2011 as a result of complications from a fall, not prostate cancer. He never knew about my locally invasive prostate cancer diagnosis that would come in 2013.

My wife, Janet, is a physician. When we married, she insisted I start having annual checkups. Before, I’d only gone to the doctor when I had to, like for an injury or an insurance requirement. In my mind, I was young and indestructible. But I agreed, and my annual visits included the standard digital rectal exam and PSA test.

When my numbers started to rise, my doctor took into account my family history and recommended a biopsy. My Gleason score was 9, so he referred me to a urologist who recommended surgery or radiation therapy.

I was lucky because Janet had access to good resources for researching treatment options. We made decisions together regarding quality of life, and I felt very comfortable with my doctors. We chose surgery and opted for a traditional prostatectomy, with the understanding that the plan may change if the doctor observed cancer in other places.

In the several weeks of prepping before my prostatectomy, I followed a healthy diet, exercised and had my blood banked for surgery. Janet often commented on how brave I was, going through the process with dogged steadiness. Three days before my surgery date, however, my apprehensions surfaced, and I broke out in a wicked case of hives. Constant itching kept me up two nights before I fell into an exhausted sleep. Luckily, the night before surgery the hives faded, and I put my brave face back on to greet the hospital staff. It was surprising how that hit me out of left field.

During the prostatectomy, my surgeon noticed microscopic disease outside of the capsule and in adjacent lymph nodes. He stopped the surgery and did not remove my prostate. I had my first hormone shot while I was in recovery. I was now considered Stage IIIA and treatment would include radiation and androgen suppression therapies. I had radiation five days a week for two months and was fortunate not to have bad side effects. I met another man being treated for a really similar diagnosis during the time I was getting radiation therapy. He was so gracious and always in lovely spirits. After several months, my numbers went down, and I was able to take a “drug vacation” for a while.

When my numbers went up again and the cancer had figured out how to get around the drug I was taking, I switched to an androgen receptor inhibitor that had recently become available. At this point, I had what they call non-metastatic castration resistant prostate cancer, meaning my body was no longer responding to the medical or surgical treatments used to curb the growth of the disease, but my cancer had not spread outside of my prostate. My doctor is aggressive about keeping a close eye on my numbers, and I have annual CTs and periodic bone imaging tests. I’ve learned that the drugs work until they don’t. Then we switch to something else.

Being busy isn’t the same thing as being active, so I’m working on developing a safe exercise plan to help strengthen my bones. I’m also eating healthier, and I’ve brought down my cholesterol.

Janet’s help as a note taker, researcher and source of support are invaluable. During those initial doctor’s appointments, she paid attention while my mind went elsewhere. She is the love of my life, and our strong marriage helps me avoid always looking over my shoulder. Life goes on, and we have fun. I try not to dwell on the illness. Instead, I focus on things I’m passionate about.

It’s so important to have the type of support I have from my wife. I also can’t say enough good things about Answer Cancer Foundation (AnCan), a virtual peer-to-peer support group that offers emotional support as well as wellness programs and exercise plans for any type of cancer. I’m an advocate for the organization and for early detection in general.

Make the effort to learn about your family medical history and share that information with your doctors and other family members. If you don’t have access to the men in your family, ask the women. They probably know. When I wanted to learn more about dad’s experience, I asked my sister-in-law because she ended up being his family liaison. Even if you don’t know your family history, don’t be stoic. Get that baseline annual exam.