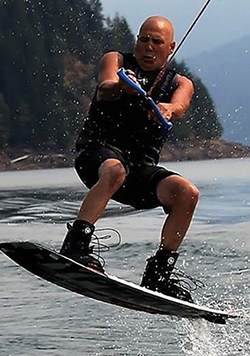 Todd Seals was diagnosed with Stage IV prostate cancer at just 42 years old. After deciding not to let cancer rule his life, he has committed to living an active lifestyle and being an inspiration to others. He encourages others to advocate for themselves, and, most importantly, to live life every day with gusto.

During a doctor’s visit for pneumonia, an X-ray of my lungs showed a mass. I was told, “It’s probably a pulmonary nodule. You should probably get that checked out.” I should have gotten it checked, but I didn’t.

I went to my primary care doctor when symptoms became serious. I developed pain and began to urinate blood. A urine sample was taken, and I was told that it tested positive for blood. “Well, duh,” I thought. I told him about the chest X-ray. He took a look and discovered that my lung was covered in tumors. He said, “I’m very scared for you.” I was scared, too.

The following weeks were a blur of blood work, bone scans, CTs and drinking contrast fluids while my symptoms worsened. I was in extreme pain and couldn’t sleep at night. My PSA was more than 3200. A biopsy was taken of my prostate. It was the worst thing that I experienced in my life. The local anesthetic did nothing to ease the pain, and the two young, female students who were present for observation made it nearly unbearable. I was diagnosed with Stage IV prostate cancer that had spread to my lungs. I had a Gleason score of 7 and a prognosis of one year.

Discovering that I had cancer was a low point for me. I had made many mistakes in my life that led to a strained relationship with family, drug addiction and homelessness. At the time of my diagnosis, I had been repairing those relationships with loved ones, been clean for nine months and had met the love of my life. I was getting my life back in order and felt ripped off. I blamed God.

I opened my Bible and read the first page that it opened to. The verse was Psalm 103:2-3. It said that "my soul will praise the Lord and not forget that He forgives all sins and heals all diseases." It became my mantra and comforted me during those painful, sleepless nights.

I was referred to an oncologist who was hopeful that he could treat the disease. This made me feel hopeful as well. Within a year of being diagnosed, I married my wife, and that night I promised her 30 years of marriage.

I started a hormone therapy drug that worked well for five years. My PSA rose around the same time my oncologist retired. He was a fantastic doctor. I was nervous about transitioning to a new oncologist, so he referred me to someone he trusted.

The new oncologist gave me a three-month prognosis, so I promptly fired him. He didn’t inspire the same hope that my last oncologist did, and I didn’t feel like he understood the gravity of the 30-year promise I’d made to my wife.

I refused to let his negativity get to me. I became my own advocate and educated myself. I spent hours poring over information about clinical trials at the National Cancer Institute in Washington and learned that a clinical trial recently ended with an FDA approval for an immunotherapy treatment for prostate cancer. It worked as a cancer vaccine and used your own cells to create a vaccine to kill your cancer cells. I knew that I wanted to try the new treatment, but my biggest hurdle was obtaining a prescription.

I went back to the oncologist I’d fired and requested the treatment but was denied because of my lung metastases. The oncologist read in an article from a medical journal that this particular immunotherapy treatment should not be given to patients with lung metastases. He offered other treatment options, which I declined. I fought back, and it got heated. (On one phone call, there might have even been some screaming.) It ended, however, in an appeal process with the insurance company.

During the months that it took for the appeal to process, my PSA rose and I began to feel sick. My wife and I decided to go directly to an expert in Las Vegas who worked for the pharmaceutical company that made the immunotherapy drug. Just before the trip, we were told that I’d won the appeal. Our trip to Vegas became a celebration. As part of the ruling, the oncologist who denied my request for a prescription had to follow a treatment plan as ordered by the doctor in Las Vegas. I finally received immunotherapy.

The only side effect that I experienced with immunotherapy was that I slept for 24 hours after my first infusion. It was much needed sleep, so I thought it was phenomenal. Immunotherapy gave me 14 side effect-free, progression-free months. After that time, I switched back to hormone therapy.

Hormone therapy resulted in a lot of side effects, including erectile dysfunction. As newlyweds, this was the most difficult one. Prescription medications helped, and I am happy to report that they are now rarely needed. I learned to focus on the love that I have for my wife and the emotional side of intimacy, and the physical part has responded. It isn’t the same as it once was, but I have adjusted to a new normal and am happy.

Overall, this has been a fantastic ride. I wasted my life prior to diagnosis. I never even took a vacation. I have since become a better husband, father, friend and kid to my mom. I have travelled all over the country, spoken at events and have become a beacon of hope to others. My story is one of hope, and if I can inspire hope in other patients, I have done my job.

The best advice I received was from another patient: “Life is going to end, and cancer is scary. There is hope, there is hope, there is hope.” Just because someone says you have cancer doesn’t mean that you are going to die. I have written a blog called Living with Prostate Cancer that is about living life. Cancer is just part of the story. Start living your life, and treasure today.