When a Storyteller has Cancer 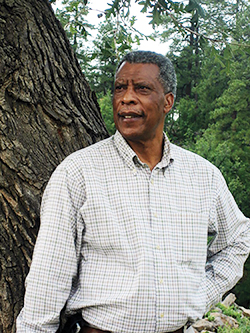 Military veteran and retired Department of Energy professional Bill Ward was raised on the White Mountain Apache Indian Reservation in Arizona. He was exposed to Agent Orange in the late 1960s during the Vietnam War, but it wasn’t until 2004 that he was diagnosed with prostate cancer. Today, Bill is cancer free, and he is enjoying a second career that takes him across the country as he shares his stories to educate and motivate veterans and underserved communities about cancer prevention. .

Three years after I retired from a rewarding career in the energy field, I was having painful erections. Thinking it was likely prostatitis, my urologist in my small town prescribed medication, which I took for 30 days. I was still having pain during sex, so I went back to him. While I waited for the appointment, I mentioned to the nurse that I should’ve gotten a second opinion. She shared my sentiment with the doctor, and his bedside manner changed completely — and not for the better. I was tired and I didn’t feel well, and it took some effort to control myself. But I did, and I found a new doctor. A friend put me in touch with a doctor about 90 miles away in Portland. He prescribed more meds and took a biopsy, but the results were inconclusive. I was still in pain, so he took more samples. This time, we got results. He called me at home to tell me I had prostate cancer.

He advised me to do some research, gather my questions and return to see him in a week. I looked up the methods that were used at that time to treat prostate cancer: watching and waiting, brachytherapy, chemotherapy and prostatectomy. I discovered a minimally-invasive surgery called a robotic prostatectomy using the da Vinci method that offered a quicker recovery time. And, there was less of a chance it would sever nerves that could cause incontinence and erectile dysfunction. I was only 58, and I knew that was what I wanted to do. My wife and my sister were my sounding boards, and they supported my decision.

My doctor in Portland didn’t perform the procedure, but he was very supportive of my decision and put me in touch with a doctor in Seattle. I made an appointment and my wife, sister and I drove the 200 miles to Seattle. The doctor assured me he could do the procedure, and I only had one question. Could he guarantee I’d be ready for elk season? He said that depended. Could I guarantee him an elk steak?

I had the surgery and was up and walking the next day. I was released the day after that. Fortunately, the cancer was in the early stage and hadn’t spread outside of the prostate or to my lymph nodes. As such, that was the only treatment I needed.

I can’t stress enough how important it is to keep your sense of humor. It helped me in Vietnam when I was fighting for my life, and when I was fighting prostate cancer. I think my positive attitude, along with my doctor’s vast experience with the da Vinci method, contributed a great deal to my successful recovery. When I returned for my checkup, I arrived with an elk steak and a bottle of wine for my doctor.

That was 2004, and I’ve been cancer free ever since. The course my life has taken since then is a direct result of an experience I had immediately following my surgery. After I was moved from recovery to my room, shadows appeared on my hospital room wall. I saw a group of tribal elders, their crystal white hair glowing in front of a blue background. As suddenly as they appeared, they were gone. I lived near the Yakima Indian Reservation so, not long after I was released, I asked if they could interpret my vision for me. They said the elders had come to take me home but felt it wasn’t my time. That’s when I decided to begin my second career as a cancer advocate for underserved communities.

I partner with hospitals and cultural organizations, traveling from the Canadian border to the Mexican border. I talk about the importance of cancer prevention and awareness, factoring in the many challenges underserved communities face. Many wives bring their husbands to hear me speak, so I emphasize their role in their husbands’ prostate health. I tell them they are likely to see the symptoms before their husbands do, and they have a much better chance of getting their husbands to follow up with the doctor than I do!

I want my talks to be productive for everyone so, while I’m talking with the men (and they often open up a little more without women present), there are often discussions going on in another room with women about their health. I lost my sister to uterine cancer; therefore, I’m profoundly aware that we need to think about cancer prevention in all areas.

As you can tell, I’m a storyteller. In fact, I’ve been told that when people ask me what time it is, they should expect to hear the story of how a clock is made. That’s the truth. I share the details of my personal experiences, and I believe that is why I appeal to my audiences. I’m a member of both the Native American and veteran communities, and we have a mutual respect for each other. For example, Native Americans view music as medicine, so many times I’ll start a session by playing the Native American flute. Or, with veterans, I can easily use a military analogy to explain my cancer experience. When people connect with you, they take what you say to heart. It also helps them open up, even about sensitive topics like prostate cancer. It is so important to have someone to talk to, even if it’s just to relieve stress or to take your mind off things. My wife and sister were by my side through all my doctor’s appointments, the surgery and my recovery. Their support was invaluable to me. No one has to go it alone.

Although I speak to many Native American/Alaskan Native tribes, I don’t focus on just these segments of the community. I don’t see ethnicity or nationality. Our anatomy is the same, regardless of race, and cancer doesn’t discriminate. I hope my storytelling encourages everyone to be proactive about cancer education. It’s my passion to educate others, and it’s very fulfilling to be an advocate for cancer awareness and prevention.