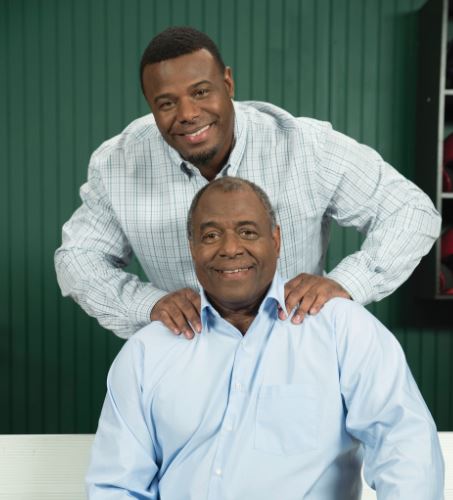 Baseball greats and father and son Ken Griffey, Sr., and Ken Griffey, Jr., share more than a love of baseball. They also share a family history of prostate cancer and a commitment to raise awareness about the disease. After his treatment for prostate cancer, Ken Sr. especially appreciated hearing how friends dealt with the common side effects of treatment and realized how much talking about the disease helps other men facing similar situations. Together, he and Ken, Jr., are encouraging others – especially those with more advanced forms of the disease – to join the conversation.

After a routine exam in 2006, he learned his PSA level was 1.9. A follow-up exam six months later showed it had jumped to 8. Knowing Ken’s family history, his doctor took an aggressive approach by performing two biopsies a couple of months apart.

“Junior was on the road, and I didn’t want to take his mind off the game. I called him and told him he needed to call his mother, but I left out the part about my prostate cancer. He got on me a few days later when I saw him in person. ‘Cancer’ is not a good word to hear, and I knew I was going to be okay because I’d caught it early. I told him he just needed to worry about his mother.”

A fellow athlete referred Ken to a doctor, who talked to him about available treatments.

“Because I was only 56,” he said, “the doctor recommended robotic surgery, which I had done a month later.”

During the surgery, they removed his prostate. Because it was early stage, surgery was the only treatment required. Even though he left the hospital with a catheter, it didn’t keep him from spending the very next day on the golf course signing autographs at a charity fundraiser.

“I was out there all day until my other son, Craig, and a family friend finally made me get out of the heat.”

For Ken, the surgery was bearable. It was the first year following the surgery that was tough, starting with the catheter.

“I expected to have the catheter for about 10 days, but my doctor left it in for more than three weeks. As you can imagine, that was uncomfortable.”

Side effects from the surgery, such as incontinence, also presented some challenges.

“The first time I sneezed,” he chuckled, “that was a surprise! I found out about ways to manage the side effects, but I didn’t know what was going to happen until it happened. Guys just don’t talk about things like that.”

After Ken’s diagnosis became public knowledge through the media, however, friends and fellow athletes began to open up to him about their own cancer experiences.

“Friends told me about drugs for erectile dysfunction and things like that, and things eventually got better,” he said. “I was really surprised to find out about all my friends who’d had prostate cancer and who knew what I was going through. They hadn’t felt comfortable sharing what they were going through until they found out what was happening to me.”

The difficulty many men face discussing prostate cancer and its symptoms is one reason the Griffeys have embraced the “Men Who Speak Up” advanced prostate cancer awareness campaign. Ken himself never had trouble talking about prostate cancer, until his diagnosis. Today, father and son travel across the country giving interviews and making personal appearances, urging men to visit the doctor for regular medical appointments. They also encourage those who are diagnosed with advanced prostate cancer to open up about the subject, especially symptoms like fatigue or difficulty doing normal activities, which could signal the disease is getting worse.

“Talk to your doctor. Find out exactly what you have. And then talk to other people,” Ken advised. He was grateful to have the strong support of his family and friends, who made speaking up easier for him.

“My wife, Val, was my biggest source of support. She asked more questions than I did. She wanted to know what I could and couldn’t do and what to expect. Val and Craig were there 24/7, and I talked to Junior on the phone all the time. My family was right there through it all.”

Both Ken and Birdie are cancer-free, but Ken continues to keep close tabs on his prostate health with his doctor. He and Ken, Jr., recognize there are plenty of men, like his uncles, who face advanced prostate cancer every day, and they want to help them feel empowered to talk about their symptoms — because it’s too important not to.

To learn more about “Men Who Speak Up,” visit menwhospeakup.com.