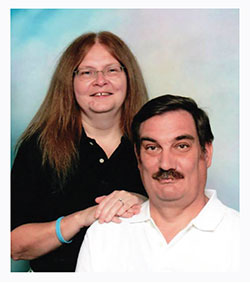 Ray Hoetger had no idea he and his wife, Linda, would become so dedicated to raising awareness about prostate cancer. When he was diagnosed, the couple joined several organizations and even created a mascot, Petey the Prostate Crusader, who brings attention to a disease that affects one in seven men.

After an elevated PSA level, a biopsy confirmed I had Stage II prostate cancer in June 2009 when I was 56 years old. The hardest part about my diagnosis was trying to understand why. Cancer didn’t run in my family, and I wasn’t a smoker. What had I done to deserve this? For some reason, I thought it would be easier to handle the diagnosis if I could pinpoint the cause. But instead I began to focus on how to get rid of this disease.

We decided that the robotic surgery, which was basically like extracting a rotten apple out of a barrel, was the best solution. It was a less invasive way to remove the prostate with a much quicker recovery time than open surgery.

Although I wanted to get rid of the cancer immediately, I had to wait until October to get in at the facility where this procedure was offered. I should have had radiation as a follow-up treatment because doctors said the cancer had spread to my lymph nodes. I guess I didn’t want to admit that I still had cancer because I didn’t let myself hear what they were saying (although my wife did).

After surgery I received hormone treatments—first Lupron, then Eligard and goserelin (Zoladex). I had hot flashes, PMS and moodiness, but overall I think I handled the side effects pretty well. In 2013, I had radiation salvage therapy to eliminate the remaining cancer cells, and as of this past October I am officially cancer-free!

Finding a support group for both my wife and I was a top priority from the beginning, and although it took some time, it was worth it. Talking about the disease with other couples was a huge relief for both of us, and we were able to make friends all over the country. We’ve lost a few along the way, but it just makes us strive harder to bring attention to this type of cancer in their honor.

It’s difficult at times to be a prostate cancer survivor and not see as much coverage as I think it should have. Prostate cancer needs publicity and money for research, too, which is why becoming advocates for this disease has become our mission.

Linda and I are actively involved with ZERO – The End of Prostate Cancer, an amazing organization that gives money and advice to men and families dealing with this disease. We also created “The Great American Blue Out,” a Facebook page that promotes prostate cancer awareness and events.

Despite speaking out publicly about this disease, dealing with any cancer diagnosis is still very personal. My advice is to be your own advocate; do plenty of research and don’t be afraid to reach out to others who have already done their fair share of homework. Also, remember that this is your treatment—don’t let anyone else influence your decisions. You have to do what’s right for you.

My wife and I have been through the trenches these last five years, and I’m not going to lie—it hasn’t been easy. Speaking with other prostate cancer patients and survivors has helped me tremendously, and I couldn’t have survived without Linda by my side.

I love my wife and am so grateful that we’re a team, along with our four grown sons. Our lives have become all about standing up, speaking out and talking about prostate cancer—making sure to count our blessings along the way.