Support Inspires Survivor to Give Back 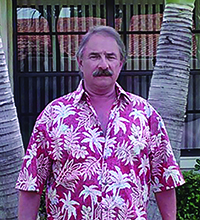 An elevated PSA prompted a biopsy and a year of watchful waiting for retired Chief Fire Officer Tim Lang. A year and another biopsy later, his doctor advised it was time to take action. Tim credits the support of his wife, friends and entire medical team with making his treatment for prostate cancer an experience he doesn’t regret at all.

After an elevated PSA and some suspect areas seen during a biopsy, my doctor suggested we keep an eye on things for a year. At my next visit, I’d secretly hoped he’d forgotten all about that, but he didn’t. My levels had risen, so he performed another biopsy. When I returned to discuss the results, he gave me the papers with my biopsy results and asked me if I had a pen. Then he told me to turn the paper over and write this down: This will not kill you!

I had prostate cancer, and, this time, watching and waiting was out of the question. I admit, I was scared, but my doctor laid out all my treatment options and told me the decision was mine. He told me to think about it and come back to see him in a few days. That’s when my research began.

My wife’s sister had bile duct cancer, and my wife had done quite a bit of research to help her find a hospital and clinical trial that eventually extended her life another two years longer than originally expected. She was good at the research, so we shifted gears to explore my options and talk to people we knew who’d been treated for prostate cancer. I had a good friend from high school who had a radical prostatectomy, so I asked him to tell me all the good and the bad. My wife’s general manager at work had radiation therapy, so I talked with him about his experience. Another friend had brachytherapy with the radioactive seeds, and I talked to him.

After gathering this information and talking it over with my wife, I chose to have intensity-modulated radiation therapy (IMRT). My doctor was affiliated with a local hospital and gave me a contact number for them and for another cancer center and said I could go to either facility for treatment. I called the hospital and kept getting transferred around. I thanked them and called the cancer center. They asked me to come in the next morning to meet the oncologist I had been referred to, so that’s what I did.

The oncologist explained the procedure to me and told me it would take 39 days of radiation. I treated it like a part-time job. I went Monday through Friday at 8 a.m., and I was on my way home by 8:20. I met with my oncology nurse every Wednesday and my oncologist every Thursday to keep tabs on my nutrition, blood pressure, etc. They warned me about potential side effects, but I was extremely lucky. I never had any side effects – never even felt fatigued.

My family and friends were very supportive, and my granddaughter was a special inspiration to me. I also started a blog and used it to document everything that happened from diagnosis through treatment. It proved to be very useful for me because I don’t always vocalize my thoughts.

I was very appreciative of how warm and caring my medical team was. I wore a different Hawaiian shirt every day, and it became a game for the radiation team to guess which shirt I’d wear the next day. In fact, on my last treatment, I brought a matching Hawaiian shirt for my oncologist. There was a candy dish I often enjoyed after I’d finished my radiation treatment, and I remember one day it was empty because they hadn’t had a chance to get to the store. I love my chocolate, so now, every three weeks, I drop off candy to make sure they don’t run out.

The day after my treatment ended, I jumped on a plane and flew to Florida to tell my mother I’d had prostate cancer and was now better. She was in her mid-80s, and I didn’t want to worry her by telling her over the phone. Surprising her after it was all over was more fun, and I was able to stay with her for a week. The treatment was five years ago, and I’ve had good checkup results ever since, as my PSA keeps dropping ever lower.

Today, my wife and I participate in organizations that allow us to give back. Each year, we head up a team for the American Cancer Society’s RUN FOR DAD, a community and family fundraiser event designed to increase awareness and educate men and their families about the importance of screening and early detection of prostate cancer.