A Little Research Can Go A Long Way 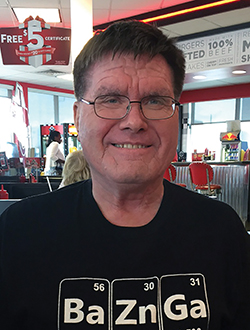 Results from Dale Brandt’s first preventive PSA check alerted him to a potential future concern about his prostate. After several years of close monitoring followed by a biopsy, he learned he had prostate cancer. Performing thorough and extensive research about his physicians, treatment options and side effects helped Dale confidently decide on the best treatment and recovery paths for him.

When I turned 55, I had my first preventive PSA check. I had an elevation of the PSA to 3.6, so I was referred to a urologist for active surveillance, including semi-annual PSA checks and annual digital rectal exams (DREs). After about two years at that level, my PSA rose to 6 and hovered there for another two years. In addition to seeing the urologist, I consulted with a PCP I knew in Michigan on trips to visit my parents. Both doctors monitored my condition as my level increased to 8.6. In late 2013, my urologist recommended a rectal MRI. The results concerned him, so a month later, I had a prostate ultrasound. Nothing suggested nodules or malignancy.

My doctors wanted me to have a transrectal ultrasound (TRUS) needle biopsy of my prostate, but I’d had heart surgery a few months earlier and had to wait a year before having another surgical procedure because of life-threatening risks. About six years after I began watching my PSA level, I had the TRUS-guided needle biopsy. Taking 12 samples is typical. My radiologist took 20. All exhibited chronic inflammation, and two tested positive for cancer. My Gleason score was 7=3+4. The two positive samples came from the central region of my prostate, which explained why my doctors never felt an abnormality during DREs. My cancer grew completely opposite from the typical prostate cancer, which starts within the outer shell and spreads.

My urologist and I discussed external-beam radiation therapy (EBRT), radiation seed implants, and surgery and then referred me to two specialists. The first consultation was with a surgeon who provided me with decent information, but I felt it was rushed, and considering the surgical procedure is irreversible, this made me very uncomfortable. The next consultation was with a radiation oncologist, who gave a detailed lecture on prostate cancer and all my options. We talked about pros, cons and potential side effects. He recommended not having the seed implants because of my age and heart condition. He advised me that whatever I decided, I needed to read Dr. Peter Scardino’s Prostate Book — and he was so right. You don’t have to be an expert to understand it, and it provides a wealth of information.

I have my Bachelor’s and Master’s degrees in Physics and thus I tend to analyze things more than the average person. Before choosing a treatment, I wanted to learn as much as possible. I read Dr. Scardino’s book, starting with the chapters on the recommended treatment options then read it in its entirety. My urologist gave me information from pharmaceutical companies and the Patient Resource Prostate Cancer Guide from his waiting room, and I went online and ordered related guides. I called reputable cancer centers and the American Cancer Society, for free information (sometimes even in the middle of the night).

Once I opted for surgery, I told my urologist I wasn’t comfortable with the surgeon I had consulted. He referred me to a more seasoned surgeon who is an expert in the robotics field. I couldn’t have asked for a better doctor. He was respectful, very interested that I was comfortable and had a sense of humor. I made the appointment to have a robotic-assisted laparoscopic radical prostatectomy and received a list of supplies to get for pre- and post-surgery, such as medications, cleansing solutions and Depends briefs/pads.

The robotic surgery included six incisions in my abdomen, each less than an inch long. The one above my navel, from which he removed my prostate, was longer. He also removed the seminal vesicles and surrounding lymph nodes and cauterized both vas deferens. He opted for a type of “super glue” to seal the incisions instead of using sutures or staples.

When pathology came back, my Gleason score was 8=3+5 indicating that the cancer had been more aggressive than the needle biopsy indicated. Two days later, after my pain was controlled and my bodily functions were working a little better, I was sent home with a Foley catheter and a drainage bag, which I had for nine days.

I had some post-op challenges. One thing that happens after prostate surgery is not being able to control the stream when you urinate. How long that lasts can vary. Before the surgery, I ordered about a dozen free assorted samples of condom-catheters from various websites to help manage it. It is important to try different options to find the type that fits you. I kept a chart of every product I tried, what worked, what didn’t and why, and sent it (at their request) to one of the condom-catheter providers. I also discovered a penile incontinence clamp and ordered one prior to surgery. I found one that I liked, having no sharp metal, or foam rubber.

I shared this information with my doctor at my three-month PSA checkup. I’ve found what works for me. Now I can be comfortable, whether I’m at home or in public. My side effects reduced with time, and my health care team continues to be supportive through the healing process.

Educating myself in advance took a lot of the worry and threat out of my situation. You must be aggressive and take an active role in dealing with cancer. I knew that a little research can go a long way … Bazinga!