Dr. Drew seeks advice of his own to get through prostate cancer 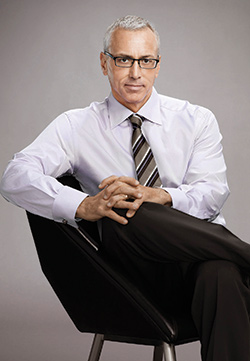 In the fall of 2011, Dr. Drew Pinsky’s life was just where he wanted it. Professionally, he had an evening TV talk show (“Dr. Drew On Call”), a daytime television talk show (“Lifechangers”), a long-running syndicated radio show (“Loveline”) and an active medical practice as a board-certified internist and addiction medicine specialist.

Personally, he and his wife, Susan, had been happily married since the early 1990s, and his triplets were successfully enrolled in college. Obviously, this was not the ideal time for a diagnosis of prostate cancer at the age of 53.

“I had an extremely busy schedule and everything was catching momentum that summer,” Pinsky said. “I was finally doing some things I had wanted to do. I said to myself, ‘Can’t I at least get into all this before I get a cancer diagnosis?’”

Pinsky credits his wife’s intuition for catching his cancer early. On the return trip home from a Caribbean vacation, he became acutely ill, suffering violent sweats and a fever for more than a week. Even after he recovered and no obvious signs of illness remained, Susan still thought something wasn’t right.

When he reluctantly saw an internist, the doctor discovered that Pinsky’s PSA (prostate-specific antigen) level had jumped from one to four. Because of his family history (both his father and uncle had prostate cancer), Pinsky had been testing his PSA since he was in his mid-40s. While his levels were still within the normal range, his doctor – like his wife – suspected a problem.

A urologist performed a digital rectal exam but discovered nothing abnormal. He did, however, diagnose Pinsky with prostatitis, an inflammation of the prostate. After two rounds of antibiotics and prostate massage, there was still no improvement and his PSA level remained elevated. The doctor ordered a biopsy.

“I was feeling fine and never had any symptoms,” Pinsky said. “But the rate of change of my PSA over one year was marked, so we did the biopsy, and boom, prostate cancer.”

Fortunately, the cancer was localized within the center of the prostate. However, the location was unusual, he said, which is why it hadn’t been discovered in the rectal exam. Surgery was discussed, but the timing wasn’t considered urgent and Pinsky explored additional consultations.

One urologist recommended active surveillance because of the tumor’s low grade (a Gleason score of 3 + 3, low PSA level and lack of surrounding lymph node involvement). This protocol included monitoring the cancer’s progression closely with regularly scheduled biopsies and PSA testing.

He continued his busy schedule and prepared himself mentally and physically for potential further treatment. The waiting period gave him time to reflect.

“I had sort of a morose conversation with my poor wife and told her, ‘You better make plans just in case,’” he said. “Given how bad I felt, you get pretty comfortable having that conversation. I was thinking it all through, and you don’t know how you are going to react. It taught me that I felt like I had led a good life, but I still wanted to do more. It was just that I was worried about all those I cared for.”

After the year of monitoring, Pinsky’s urologist ordered additional testing; then both the doctor and Pinsky felt it was time for surgery. He elected to have a robotic-assisted prostatectomy that would remove the entire prostate. Throughout the process, Pinsky said he trusted the wisdom and the recommendations of his clinicians.

“I keep emphasizing a physician’s judgment and intuition,” he said. “Pick a physician you’re confident in, ask questions and then let them do their job, let them follow their intuition. For example, if you’re seeing me [as a physician], you aren’t seeing me just for my knowledge but for my applied knowledge, wisdom and judgment. I got other consultations and I don’t have any regrets. Everyone has used their judgment and has been extremely skilled in getting me to the right place.”

Pinsky recovered from the procedure over the Independence Day holiday in 2013, but due to a sensitivity to the anesthesia and remaining low-grade infection from the prostatitis, it took him about six months before he felt completely back to normal.

“It has become increasingly clear if you’re in my age group, have the surgery,” he said. “But the surgery was brutal. I’m not going to kid anyone. However, I was home after one day and back to work in 10 days. I really began to feel better in the winter of 2014, and I have not felt this good in about four years.”

Pinsky is grateful that he was able to avoid the surgical side effects feared by many men: erectile dysfunction and incontinence.

“These are the areas your surgeon is going to worry about so you needn’t worry,” he said. “I have none of those side effects—maybe a little less confidence in an erection than I used to have, but other than that, everything’s A-OK. Men don’t want anyone messing around with that part of the body, and they certainly don’t want anyone messing up the function of that part.”

Over a year later, Pinsky remains cancer-free and sees his urologist every six months. After his surgery and recovery, he was also asked to join the board of the Prostate Cancer Foundation. He hopes to promote the foundation’s research breakthroughs, but most importantly, he hopes to watch his own health a little more closely.

“I take better care of myself now,” he said. “I exercise more. I watch my diet. As a physician, you know how many bad things can happen, and I worry a little more now. But I’m paying attention and I appreciate feeling healthy.”

Pinsky said he also enjoys helping other men who are going through a similar experience.

“I tell them, ‘Don’t freak out. Relax.’ That’s the main thing,” he said. “I’ve laughed and cried with men who have this, and it stinks. It’s not fun. You are now a member of a brotherhood you would rather not be a part of, but believe me, there are worse things.”