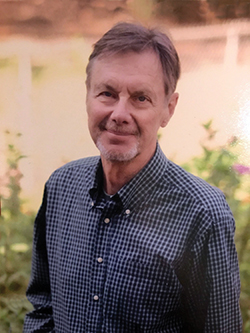 George Benner was diagnosed with Stage IIC prostate cancer at 75 years old. After the shock of his diagnosis, he immersed himself in research studies and learned all that he could about his treatment options. He encourages others to advocate for themselves, to take their time and make informed treatment decisions.

I had a CT taken prior to a routine colonoscopy, and my doctor told me that he would like to check something that he saw on my prostate. I was then sent to a urologist who took a biopsy. I was diagnosed with Stage IIC prostate cancer with a PSA of 2.41 and a Gleason score of 7 (4+3). I was in shock.

My urologist and I talked about my treatment options. His suggestions were active surveillance and radiation therapy because of my age and health condition. I have a history of heart problems and take blood thinning medication, so he strongly advised against surgery because it would be a risk. In fact, he said, “You won’t find a surgeon who will take your prostate out because of your age, heart problems and medications.”

Before telling my family, I got a second opinion. I had a cousin who passed away from prostate cancer, so I did not want to worry them. The second urologist confirmed the original diagnosis. He also suggested active surveillance and radiation therapy. Those treatment options did not appeal to me. I did not like the idea of radiation and could not deal with the emotions that came with living with a disease in my body and not pursuing active treatment to get rid of it. I wanted it out.

My neighbor suggested that I visit a support group, so I joined a local one. A gentleman I met was a prostate cancer survivor who had proton beam therapy treatment. Proton therapy is a type of radiation treatment that uses protons instead of X-rays to treat cancer. One evening, this gentleman visited me and my wife at our home where we discussed radiation treatment for ninety minutes.

I did my own thorough research on the disease and available treatment options. You can never have too much information. I continued to talk to people and got a lot of feedback.

I contacted my friend for his doctor's information. I believed that proton therapy would respect my organs in a way that a traditional radiation therapy couldn’t. The proton therapy process allows a doctor to deliver a precise depth of penetration of protons to the prostate. I scheduled an appointment with my friend’s doctor, who worked at a cancer center out of state. With the support of my family, I was able to relocate and receive treatment with proton therapy.

I was on hormone therapy for a year, and it had some side effects. I felt like I had started menopause because I would get hot flashes. Another side effect was what I like to call “Superman syndrome” or the loss of muscle mass. One of my hobbies is golfing, and I was surprised by how much the loss of muscle tone affected my game. I would try my hardest, but was shocked when I could not drive the ball very far.

Proton therapy caused no side effects other than slight fatigue. I noticed that I took more naps, but that wasn’t an issue for me.

Being away from home during treatment was difficult, yet manageable. The cancer center where I received treatment offered a lot of amenities that kept me busy. I took a few classes, meditated and spoke to the counselors on site. I talked to my counselor about being somewhat addicted to researching. I could not stop. I wanted to be well-informed, but it was a habit that was getting out of hand.

I am grateful for the support that I received from my family, friends and neighbors. You can never have enough of a good support system, including the support for your treatment decisions. Take your time when you are deciding on a treatment because it is your decision to make. You are going to have to live with it, so make sure that you know what you are doing.

When you are diagnosed with cancer, you become a lot more aware of your mortality. Everything can’t be fixed. Regarding my heart problems, I had a nurse tell me, “Once you are a heart patient, you are a heart patient for life.” I believe that the same is true for cancer. I have come to learn that wellness is not the absence of illness. Wellness is your quality of life and attitude.