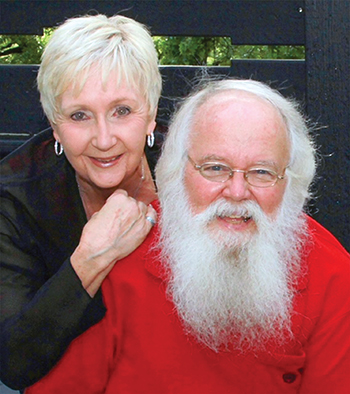 Jerry Peterson knows the value of support. The retired elementary school principal immediately sought the help of others when he learned he had prostate cancer at age 71. Today, he has a clean bill of health. As he continues to be monitored, he also continues to offer the type of support that helped him so much during his treatment.

When you discover you have prostate cancer, you have a lot to learn and important choices to make. My best advice is to make sure you are comfortable with your treatment decision — then put it behind you and move forward.

A high PSA result from an annual physical was the first indication something was wrong. My doctor monitored my condition for the next few months then referred me to a urologist.

I was diagnosed with prostate cancer after test results from a targeted biopsy showed four spots on my prostate, and my Gleason scores were a bit concerning. My urologist also ordered a bone scan. After reviewing all my test results, he recommended a treatment plan consisting of intensity-modulated radiation therapy (IMRT) and hormone therapy. After meeting with him, I began researching treatment options to learn more. There are many good resources available online. If you aren’t sure where to look, ask your health care team.

At the insistence of my wife and my daughter-in-law, who is a nurse anesthetist, I got a second opinion. I think they did everything but make the appointment for me, and I’m glad. That doctor agreed with my first doctor’s treatment plan, which made me feel very comfortable.

Prostate cancer can run in families. My grandpa had it. My dad passed away at 61 of a heart attack, so I have no idea if he had it or would have had it. But I knew I had to talk with my son right away to tell him now was the time to get checked. When I did, he told me he’d already made a doctor’s appointment.

I started treatment with a single hormone shot. At first, I thought I might have been given a placebo instead of actual hormone therapy because I didn’t have any of the hot flashes or night sweats I’d heard so much about. As time went on, I developed some hot flashes, but they were minimal.

Next I began the first of 43 IMRT treatments. Those took two months to the day, Monday through Friday. I went by myself to the appointments because it was really very easy. The only issue I had was keeping a full bladder, which was required for the treatments. I’m not a water drinker, and I had to make a concerted effort to get enough down. I had a long ride to the treatment center, and that presented an additional challenge — especially when there was road construction!

I realize it may sound like my prostate cancer was no big deal, but that isn’t the case. I had challenges, but they were easier to handle because of the support that surrounded me.

As a retired elementary school principal, I was used to meeting with people and finding support in a group setting. At my first urology appointment, I asked the nurse about support groups and she gave me information about an organization for men with prostate cancer called the Prostate Network.

I found the meetings to be quite valuable right from the start. We meet twice a month. The first is a general meeting, where we talk about our situations and things that can be difficult to talk about with other people, such as sexual issues. The second meeting typically consists of a speaker, where we learn about a specific topic such as a new treatment or research developments.

The Prostate Network also offers meetings for spouses and partners. They share how to manage certain side effects and talk about their feelings.

I’ve always been a relatively open person, and I have also shared a lot about my experience on Facebook. That has opened the door to reconnecting with old friends, and it has even prompted some of my friends to get tested. I always encourage men to get their annual physicals and include the PSA test. One friend who has prostate cancer even felt comforted because he wasn’t surprised when a certain side effect I had talked about happened to him. My experience had prepared him.

I’m pleased that my treatment plan was successful, and I will have follow-ups for some time. In the meantime, I’ll continue to be involved with the Prostate Network. Thanks to that group, I’ve had an important realization about how lucky I am. I’ve met men with all stages and types of prostate cancer. I’ve really had a smooth path in comparison to some, and I am grateful.

Being alongside them in their journeys also comforts me. I know there is a risk of the cancer returning, and I have seen firsthand the many treatment options that are out there. I have alternatives, and I have hope.