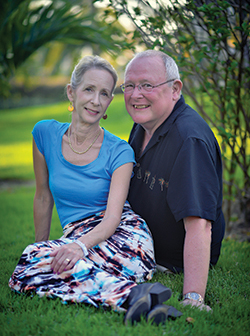 Social worker Tom Kirkwood learned his PSA level was elevated after a test in 2009. He then met with a urologist, where he learned he had prostate cancer. Currently he is enrolled in a clinical trial and planning his retirement. He enjoys spending as much time as possible with his wife and two adult daughters.

I was diagnosed with prostate cancer in 2009 at age 58. I had gone a couple of years without getting a physical and therefore without a PSA test. If I hadn’t skipped those years of PSA tests, my story might be different. Once I did go back for an annual physical, my PSA level was high: around 16.

Concerned by this result, my doctor referred me to a urologist, who took a biopsy sample. The lab results came back, and I had prostate cancer. Although the initial diagnosis scared me, I tried to rationalize it. Prostate cancer is a curable cancer, so I tried to focus on that and not panic. That would come later.

We immediately decided on a prostatectomy and scheduled the surgery. I hoped surgery would take care of everything and get all the cancer out. It’s the most radical and invasive treatment, and I was optimistic I’d be done afterward. Recovery was difficult but, honestly, the biopsy scared me more than surgery did. I felt I was doing the best I could to get the cancer out.

After the surgery, my PSA level dropped and was fine for a couple of years until it became elevated again. My doctor recommended radiation as my next treatment option. I had 39 sessions. The sessions themselves were quick, and the treatment center had a sense of camaraderie. I made friends there with those who also were going through radiation. Fortunately, I did not feel side effects from radiation.

When I finished my radiation therapy, my PSA level was fine again. But sure enough, a couple of years later, it started to creep up. My urologist hadn’t really marked out a long-term plan or explained what we could try next if the initial surgery was not successful. I didn’t realize the limitation of treatment. The panic I was able to push away when I was first diagnosed returned as I wondered what we’d try next.

It turned out to be hormone therapy. I began by having shots every three months. Hormone therapy was the strangest treatment for me because it affected my personality. I had less energy and became less outgoing but attempted to make the best of it by using humor. I explained to others that I couldn’t watch a Hallmark movie without crying my eyes out. The doctor even commented that it worked out, as I could afford to be a bit more sensitive. Even with these emotional changes, I kept my chin up, hoping hormone therapy would work.

Unfortunately, my PSA level increased yet again while I was taking hormone therapy. This resulted in my cancer being called terminal for the first time. This knocked my socks off and changed my attitude. I got a second opinion from another doctor, who didn’t say anything different.

This all got my attention and made me start taking inventory. I entered a contemplative stage, thinking about my achievements, what I still wanted to accomplish and what I wanted to do. Earlier in my treatment, I had wondered whether it was time to retire. I’ve now decided to retire this summer. I’ve been a social worker at a residential treatment program for teenagers for 38 years, so retirement in itself is a big milestone to process. This introspection was a big change that came with my hormone treatment.

I’m now enrolled in a clinical trial. I don’t know how they define a good fight against cancer. For me, it’s keeping a positive attitude while still acknowledging that you do have cancer and will struggle with it. Hopefully there’s a cure. Right now, for me there’s not, but clinical trials are all over the place.

My wife, Susan, has been a great support to me throughout this ordeal. She assists with everyday things like appointments and bills, and she listens and talks openly with me about this process. Since I was diagnosed, we’ve kept an ongoing, open discussion about my cancer, how it affects me and how it affects her. We now have a closer and better relationship. Susan always comes with me to appointments, which has been incredibly helpful. Once you hear the word “cancer,” you don’t hear the rest of what the doctor tells you. She hears what I don’t hear.

I’ve always been open with Susan and the rest of my family, including my two adult daughters. Once treatments started failing, I also started going to support groups. It’s helpful for me to share and talk about my cancer. People with cancer don’t need to live with it by themselves and be stoic. You have to be strong, but strength isn’t stoicism and silently bearing it. Strength is keeping yourself in the present and not letting cancer get you down. Cancer doesn’t fill my head every moment. That’s the battle, and that’s how you win: continuing to live your life and not letting cancer be your only focus.