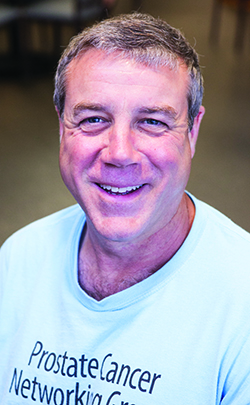 Steve Hentzen and his son decided to attend a Boy Scouts summer camp. To do so, Steve needed a physical, so he went to his primary care physician. His doctor ordered all of the standard tests for a man of 46 years, including a prostate-specific antigen (PSA) test. His PSA level came back high, so additional tests were ordered. After three opinions with the same results, Steve accepted his diagnosis of Stage IIC prostate cancer and began to make decisions regarding treatment.

I hadn’t had any indication that anything was wrong, which made it even harder to hear the diagnosis. I found myself in a dark, lonely place and really didn’t know what to do at first. I went for multiple opinions and everyone came up with the same results and suggested all of the same treatment options. From there, I decided to go with the most experienced doctor I’d seen and we proceeded with surgery to remove my prostate. After the operation, my PSA went from 19 to 0.07 — but it was supposed to be 0.00. We discussed additional treatment but decided to just monitor my numbers. A year later, my PSA began to rise. I opted for eight weeks of something called “salvage radiation,” which is basically radiating where the prostate used to be. My PSA went down again, but was not completely gone. We’ve been carefully monitoring since and I haven’t had any spikes.

When I was first diagnosed, someone told me I shouldn’t tell my 12-year-old son about the cancer. That was the worst advice I could’ve followed. He caught me lying so I took him to a park, sat him down and told him everything. My son is adopted and I’m a single father, so when he associated the cancer with death, in his mind, his dad was going to die and he was going to be put up for adoption again. Coping with his feelings and mine was one of the hardest parts of this journey. At one point, he was faced with being kicked out of school and even though we were going to counseling, nothing helped. My sister decided to step in and took him for the last few months of the school year. And I’m so grateful, because something changed and we were both able to get our minds right again.

Before my diagnosis I was overweight, I smoked, I didn’t work out. A good friend motivated me to get healthy and now I’m physically fit and feeling great. As far as support goes, my family was great and I had close friends who helped out. Some people just didn’t know what to say, though, and I had friends who struggled. Although I’m not mad, I know that those relationships will never be the same because no matter how much you value the friendship, if they can’t deal with your diagnosis you have to move on.

I also turned to support groups. My involvement began fairly soon after my diagnosis, when my brother called someone he knew to ask for help on my behalf. Typically, guys don’t talk about this disease, but it’s not healthy to keep it in. The group was great at first — We were a bunch of guys who sat around and talked about everything, whether or not it was cancer related. The dynamic of the group changed though when the venue and the individuals running it changed. In response, a few of us decided to break off and create our own group.

We had meetings at the library for awhile and eventually, The Prostate Cancer Networking Group was born. As we continued to grow, we branded ourselves a local, grassroots organization of prostate cancer survivors, their partners and those helping in the fight to raise awareness and spread hope. Now the group is a very prominent part of my life. I help organize events and host meetings, all while working toward our primary goal of becoming #StrongerTogether.

Currently, I get checkups every six months. My PSA is still not at 0.01 and there is most certainly a fear associated with that, but I channel my emotions into helping others, and it feels awesome. I’ve developed a better appreciation for what my time means and I spend much of it doing advocacy work.

A lot of this disease is out of your control but you can work to stack the deck in your favor — eat right, exercise and do what you need to do to maintain mental wellness. This journey led to a drastic change in my parenting style and a true appreciation for the life I once took for granted. Because of both, I can now focus on what’s important — enjoying every minute of every single day, surrounded by the people who matter most.