Sailing away from “it” 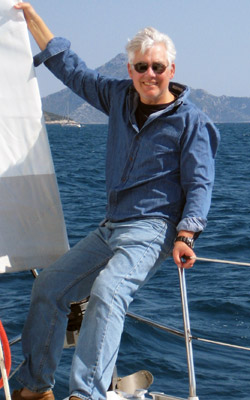 Originally from Texas, Ted Gorton now resides in London, where he spends his retirement as a writer and translator on Middle Eastern themes. After being diagnosed with advanced prostate cancer at age 62, he credits a strong will, determined attitude and a passion for sailing for his victory over the disease. Read updates to Ted’s journey through prostate cancer at http://tjgorton.wordpress.com/teds-blog.

My wife nagged me. It was wonderful. This may require some explanation.

Just before Christmas 2009, convinced I was in fine health for a 62-year-old, I was diagnosed with advanced prostate cancer, an aggressive kind that had torn through the prostate and gone on to colonize my pelvis and surrounding lymph nodes—all without causing symptoms or even raising my telltale PSA level.

Two eminent specialists looked at the scan and biopsy results, shook their heads gravely and gave the same prognosis: Get your affairs in order, and if you make it two years you will be lucky. Made for a rather somber Christmas.

The transition was brutal. I went from jogging daily – with a borderline hyperactive fount of energy and cheerfulness that sometimes dismayed my family, looking at the world as though it was newly created just for me – to terminally ill, all in less than a week. It happens to many people, of course. Like most of them, I imagine, I went through a phase of, “This can’t be happening to ME,” as though I belonged to a somehow exempt class, as though my “me” was somehow special, not to say immortal.

But something didn’t let me accept it. Or “It” as I came to think about it. I did not reason; I just threw myself into new, long-term things: learning modern Greek, starting research for a biography on a historical figure I had always been interested in—but mainly sailing.

I had sailed only occasionally, on dinghies in the Gulf of Oman when we lived in Muscat 30 years ago, and loved it. I felt that the intersection of wind, sea and sky was where I belonged. Then 30 years flashed by as our family moved every few years (sometimes very few) from one country to another, with two evacuations from a war zone thrown in for variety. Not much time for sailing until this Christmas, when I woke up one day with the conviction that not only would I not go gently into anybody’s good night, but I would fight back, reject It with a rude denial.

Within a day I had combed the Internet for sailing courses, registered myself and my slightly surprised son for a series of courses on the English coast, and signed up for a Day Skipper course out of Lefkada in the Ionian Sea just south of Corfu. And with even more temerity, I assumed that it all would have transformed me into a competent sailor by June. I booked a 35-foot yacht to sail around the Ionian with my wife (a self-described “terra firma person” whose feet on the ground have provided a counterbalance to my aqueous nature), my son and my younger daughter who had just moved to New York. They all went along with this latest folly with good humor and varying degrees of enthusiasm; my daughter even said she would take some basic sailing lessons to prepare.

The spring was all about sailing and the sea. Courses in sailing on the Solent and Isle of Wight but also VHF radio operation, marine diesel maintenance, safety at sea, and of course navigation, signals by flag and fog-horn and patterns of lights that help you tell a trawler from a minesweeper at night. A whole new world, with intensive spoken Greek to top it off.

Just before leaving for Greece in mid-June, my oncologist reminded me of It, putting me through a battery of scans to see if the treatment was working. This is mainly a cocktail of different hormones, the side effects of which would have been serious in a younger man, resulting in what they call “chemical castration.” A horrid word, but in my case, the end of an already diminished sex life (by age or disease, who knows?), redistribution of fat (to the tummy) and, for a time, hot flashes and teary episodes—not tragic if, in the words of George Burns, you consider the alternative. If you have lived as a man, enthusiastically so, for 62 years, why not try a few years as a menopausal woman?

The initial scan results looked good, so we set off for Greece in especially good spirits. But then my usually uncommunicative doctor actually called me, nearly causing me to drive off an overpass, which would have been ironic. He told me the cancer had regressed, completely, from the bones and lymph nodes and now only resided where it began, in the center of the prostate gland. This was probably treatable and they would design a course of radiotherapy later in the summer. A “prognosis-changer,” as he put it, with the former two-year deadline rising at least to five and possibly beyond. The new treatment would be with “curative intent” rather than just palliative.

I am sure that sailing around the Greek islands – after all that preparation and with the pristine natural beauty, the charm of tiny, unspoiled fishing villages, the weather, the food and wine, the fun of boats, the friendly island people – would have been wonderful, literally the fulfillment of a dream. As it was, it was as close to paradise as I can imagine.

Back home in London, life resumed its course. I knew that there are no miracles and that the fight was far from over, but I was able to get back to something close to life pre-diagnosis.

I must confess to having the best possible ally. I will not gush about how supportive my wife was, and is. It was as though she had been born for this role and until that moment had suppressed a huge talent for making one feel that things are brighter than they say, that one is living with a wellspring of love and unconditional solidarity. She made every day a joyful one, with no laments or tears to waste a minute of the time remaining.

Then that fateful Sunday when suddenly the dust and cobwebs and junk in our garage got the better of her. I knew then that for her, I wasn’t sick anymore. And I knew that it’s better to be healthy (even with an occasional nag) than sick (this really is more profound than it sounds), even if one is treated with the best-meaning special attention.

Now, three-and-a-half years later, the prognosis is looking even better. I went through seven weeks of radiotherapy to the prostate, previously colonized lymph nodes and pelvis, without any of the horrendous side effects I had been warned of. I am now off hormones, a period called “watchful waiting.” My oncologist is a firm believer in diet and supplements to combat cancer, so I take Vitamin D and green tea extract daily.

Along with the sailing, of course. I am convinced that psychology is every bit as important as treatment. And the part of prostate cancer that resides in the head, whatever stress or worry that might have contributed to the appearance or aggressive nature of It, continues to be battered into remission on the pristine blue waters of the Ionian Islands. Incredibly, my terrestrial wife herself came up with the idea of actually buying a boat. Six weeks sailing a year, meaning that I am constantly either on our lovely Moira (an ancient Greek word meaning “allotted portion or fate”) or dreaming about the next time.

When my wife – who is becoming more of a sailor every time – is aboard, we putter from island to island, legendary places like Ithaka and Kefalonia. Night finds us in tiny harbors like Kioni, where we nestle in among the colorful fishing boats. When it is just me and a male friend or two, we are slightly more adventurous.

One lasting side effect is that I understand a lot more about being on the receiving end of an advanced cancer diagnosis. I used to shy away from friends who suddenly found they have It in one form or another, thinking surely they don’t want to talk about it and generally not knowing what attitude to take. Now, I seek out friends or acquaintances who have had such news, to let them know that they are not alone. I welcome them to this exclusive club—exclusive because it rejects all those smugs still living with the illusion that they are and always will be healthy. We members have been served with tangible reminders of our mortality, and this gives us something very precious: the realization that every day, every minute must be made to count, to provide the maximum texture of having been lived well. Must one be sick to attain this realization?

Hormones, moral support or attitude, dumb luck or a freak of nature, I will never know what exactly caused this sea change in the nature of It. Having just celebrated my 66th birthday (I was supposed to have bowed out well before now), I have the feeling that even if It were to reappear tomorrow, as it of course could, I have had a good measure of revenge.

Read more about Ted and his journey through prostate cancer at http://tjgorton.wordpress.com/home.