Putting My Faith In God and My Wife 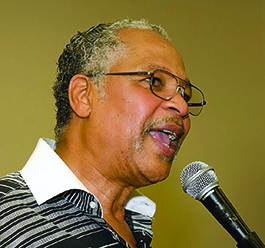 Euvon Jones was shocked to learn he had Stage IV prostate cancer. With the love and support of his family and his faith in God, he worked closely with his oncologist, who recommended hormone therapy and a clinical trial for immunotherapy. He and his wife, Janet, worked together as a team to live the healthiest life possible. A motivational artist, Euvon is enjoying retirement with his wife, Janet, four children and six grandchildren.

I'd never tolerated my body telling me what to do until suddenly, in 2010, at 59 years old, it called an executive board meeting without consulting me first. I had back pain I tried to ignore, and a loss of appetite that couldn’t be rationalized away. Although I wouldn’t admit it, my gradual loss of energy defeated the iron will I’d maintained for more than 40 years as a sheet metal technician and HVAC business owner. For the first time in my life, I felt like I’d lost control.

In 2011, a series of tests, including an MRI, CT and biopsy, confirmed that my prostate specific antigen (PSA) had tested at 398. I was diagnosed with metastatic prostate cancer that had spread to my lymph nodes and bones. I felt like I’d been given a death sentence. My wife, Janet, and I were shocked and devastated, and I sought the care of a world-renowned prostate cancer oncologist. My cancer was advanced enough that I did not qualify for chemotherapy or radiation. My doctor prescribed a tri-monthly shot to keep my bones from breaking down due to the spread in my bone marrow, daily hormone pills to inhibit the production of prostate cancer-feeding testosterone, and tri-monthly painful hormone shots of another testosterone blocker.

Janet, meanwhile, began a concerted attack against the cancer on the home front. She removed toxic conventional and processed foods and replaced them with those that are natural and organic, including cancer-fighting berries, pomegranates, kale, cruciferous vegetables, yams and, occasionally, organic, grass-fed meats and wild Pacific seafood. She bought new cleaning and personal hygiene products, including soaps, toothpaste and cleaning agents, dramatically changing our lifestyle and improving my quality of life.

After a year of hormone therapy, my PSA level that had dropped to 0.1 climbed again to 19; the hormones had become ineffective. My oncologist enrolled me in a clinical trial for an immunotherapy. Over a six-week period, a leukapheresis process would intravenously separate some of my white blood cells from the red and extract them from my body. The white cells would be transported to a lab and strengthened with nutrients. Three days later, they would be returned to the hospital and infused back inside me to fight the cancer cells. The entire process would happen three times beginning in early 2013.

Unfortunately, my first session was plagued by at least 15 failed, painful attempts to insert a huge needle in my veins until both of my arms were black and blue. My veins were too small. The nurse felt awful. I was so angry, and all I could do was hug her and assure her that I would survive the ordeal. My wife and I left with a resolve that I couldn’t participate in the clinical trial. My oncologist, however, scheduled a surgical procedure of inserting temporary ports through my jugular vein and out of my chest where the white blood cells would be extracted. It was scary, but I pushed forward.

Each session took four hours to complete and caused me to experience chills, dizziness and some weakness. When it was done, my doctor surgically removed the ports, and I was prescribed another hormone blocker.

My PSA level gradually and blessedly declined again and rested at 0.1. However, I still experienced too much fatigue and bone pain to continue my physically demanding HVAC business. In 2014, I retired, just in time to encounter a dental complication. The bone-enhancing agents caused necrosis in my mouth, which required one of my teeth to be extracted. Tiny particles of jawbone were dying and surfacing on top of my gum, which would have to be carefully removed. The dentist, who specialized in oncology patients, warned that my entire jawbone may have to be removed. He prescribed a fluoride-filled mouthwash in hopes that my gum would heal. Janet was skeptical about the amount of fluoride swishing around that open gum and possibly getting into my bloodstream. So, at her request, I started gargling with Himalayan pink salt for three minutes, three to four times a day for months, and my gum began to heal.

Janet gave me a Celebration of Life party soon after my initial diagnosis. Family and friends poured into our home to show their love and support, which continues today. During that time, one of my uncles revealed that he, too, had Stage IV prostate cancer. We talked regularly to compare notes and pray together until he finally went home to glory in December 2014.

Janet and I have appeared on various social media channels to share “Euvon’s Story” and at various seminars, conventions, health fairs and church events, singing songs of encouragement and giving our testimony of hope, motivating families to treat prostate cancer as a family crisis, rather than a personal one.