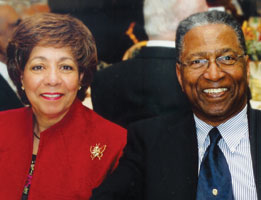 COL. James (Jim) Williams retired from the Regular Army in 1984 as a full colonel after 25 years of service. For the next 15 years, he pursued a high-level management career in Human Resources for Montgomery Ward, Inc, the American Bar Association and the Penn State Geisinger Health System at The Milton S. Hershey Medical Center.

In 1991, he was given a higher priority assignment — to survive prostate cancer. After his diagnosis and treatment, Jim became an avid cancer patient advocate. In 1999, he launched his consulting firm, Jim Williams and Associates, which specializes in prostate cancer awareness, education and advocacy. He serves on multiple boards and committees pertaining to cancer advocacy, including the Intercultural Cancer Council (ICC) — chair elect, and the Patient Advocacy Committee for American College of Surgeons Oncology Group (ACOSOG).

He has thrived as a cancer survivor with his wife, Lois, who is a homemaker and active volunteer with The Links, Inc. They live in Camp Hill, Pa. and have three grown children. They have also have a granddaughter, Christina, who is the apple of her grandfather’s eye.

Since my physician told me I had prostate cancer in 1991, I’ve been on a mission. Men are the unorganized majority. Unlike women who console one another through a crisis, men internalize the problem. It’s my mission to get men to talk about it.

I had two combat tours in Vietnam and there were some days when I didn’t know if I was going to see the next sunset or sunrise. But nothing was more devastating for me than being diagnosed with cancer. There are all kinds of help and assistance and that’s very important, but at the end of the day, it’s something you have to deal with. Especially in the minority community, there has been an attitude of fatalism: “There’s nothing I can do about this.” I’m living proof, however, that being diagnosed with prostate cancer is not a death sentence, and that there are many good years of life ahead.

In 1991, I was 55 and my wife kept bugging me about going to see our primary care physician, who I had never met. I told her that as a private pilot I had to get flight physicals every three years to maintain my license so I did not need to go. I eventually went and when I did, I met my first angel — my primary care physician. His father had prostate cancer and so he included a new test in my exam called the PSA (prostate-specific antigen) test. He discovered that my PSA was elevated, and the result of that visit was that I was diagnosed with prostate cancer.

None of us keeps a specialist on retainer, and one of the problems we have in prostate cancer is that we do not have a gold standard. When a man is diagnosed with cancer, it is often left up to the patient to decide whether he wants to have surgery, radiation, cryosurgery, or to wait and see if it’s growing. Fortunately, prostate is one of the least aggressive cancers so you do have time to become educated and look at all options. Unfortunately, the patient is not usually exposed to all the options on an equal basis.

This led to my third angel — my surgeon at the cancer center. When I met him in 1991, he had done about 200 prostate surgeries that year. Seventeen years later, that’s still all he does. He’s amazing. If you’re going to have a major operation, you want somebody that performs a lot of them.

During the surgery, he found that the margin around the site where the prostate was removed was positive for cancer, but thankfully, there was no cancer in my lymph nodes. In following his recommendations, I underwent six months of hormonal therapy to kill the male hormone, testosterone. Since that treatment, almost 18 years ago, my PSA has remained at below 0.05!

I have come to realize that every day is a miracle. I believe having cancer changed my philosophy on life, and that I have a responsibility to try and raise the awareness level in whatever small way I can. We men don’t like to cut down trees, we like to cut down the forest, but I’ve come to realize that the answer is “one-on-one,” eyeball-to-eyeball.

The basic message I try to present is that no longer is prostate cancer (and most cancers) a death sentence. This is an asymptomatic disease; there are no early warning signs. We men don’t usually become sensitive to illnesses until we have a pain, ache or problem, and that can be too late. Especially the baby boomers, I tell them that regardless of your standard of living, you’re going to live a lot longer than your parents did. But your quality of life might stink if you don’t get ahead of this disease, and early detection and screening are the keys.